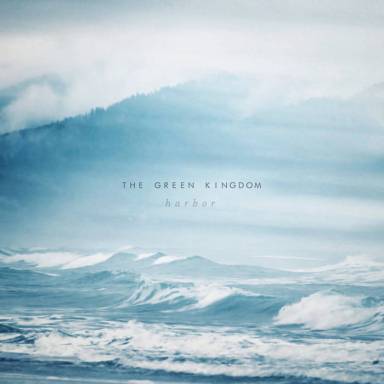 Harbor is at rest, gazing out upon a vast body of water. We can take refuge here. This is a gate and a shield, built on the precipice of an eternal sea. Clean, reverb-laced guitar notes are shell-smooth reminders of its cleansing power, and the water itself is a washed-out kind of blue.

“Inlet” floats on gentle, affirming waves. Soon, ringing arpeggios are broken up by a series of lightly strummed chords; there’s a vague formula at play here. The notes are controlled by the structure of the song, but they’re still able to swish around freely in the liquid surf.

Voices are carried on a breath of air, bringing days by the ocean back to life. This is a special place; you carry it around with you, as if it were a necklace. The title track is the closest to an instrumental song with its verse-chorus-verse form, the guitar gently singing, drifting, and the drums gently rolling back and forth, in tune with the lapping waves that pause to kiss the shore.

“Haze Layers” dives into the swirling deep and introduces a dull, undersea rhythm which sends out a steady pulse, complementing the dance of mermaids. Other electronic creatures scurry and swim around while this happens. The record emits a kind, bright light, less of July’s glaring sun and more of September’s softer Indian Summer shades.

In the sky, the airy “Thermals” rides on warm currents and projects the deeper blue of a higher altitude. These ambient chords are soaked in reverb, and they’re reminiscent of Fleetwood Mac’s classic “Albatross”, which gave us a couple of delectable major seventh chords. The sublime, chilled-out splashes of sound and their lilting, relaxed vibes fit ambient music perfectly. “Evergreen Sunset” adds a slow, eternal melody; the sound is the sea, washing in and washing out in a dreamy, ageless cycle. The universe contains all things, and a billion other undiscovered, distant shores are affected by the same motion.

Later on, the guitar’s tone becomes muted, closed, drowning in a wet pit of sand. Album closer “Endless Blue Drift” introduces some gorgeous swells, and the music is anchored in place. Sea-green notes link up to create soothing (but never drowsy) melodies. As The Green Kingdom, Michael Cottone is both the coastguard in charge of looking after the sound and an admirer of the ocean itself. Water is a prevalent theme when it comes to ambient music, and there’s a reason for that, but Harbor is as fresh as a breath of coastal air. Here, both harbor and ocean are one and the same. (James Catchpole)