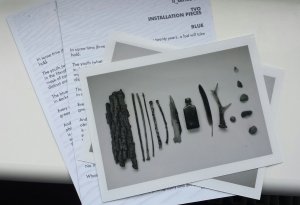 Glasgow’s Broken20 label is putting the finishing touches on the Li Series, which pairs music with short texts and photos.  The interdisciplinary nature of the project attracted us to this series, and many warm surprises are to be found within.

Li refers to the “random but recognizable patterns” found in nature ~ bark, ripple, sedimentary layer.  The series seeks to emulate such patterns.  Each is paired with a photograph by Dave Fyans (Erstlaub), which together with the text creates a mood that afterwards seems inextricable from the prose.  This is immediately apparent from the opener, as TVO (Ruaridh Law)‘s “Installation Pieces” springs to life once one reads Dave Donnelly’s piece “Blue”.  He describes a future hue that will be adopted by youth in clothing and skin, inspired by the soft glow of electronic devices.  One can imagine such a future even without the music, but with the music, which sounds like the buzz of incandescence, one can experience it.  The power of the written image even trumps that of the rock on the cover, a thousand words being more powerful than a picture; it even drowns the track description, which mentions Ed Asner reading William Burroughs and other lively aspects of the set.  It’s as if the words become the magnet, and the music the filament.  Soon, all is blue.

On the next release, the players shift places.  The author Donnelly becomes the artist Dirty Hope; the text is written by Gerard McKeever.  This single, 42-minute piece is more obvious in theme, as title, text and object serve a single purpose: to describe Storm Katie.  “It was the latest of many anxious nights, waiting for this storm to pass …”  The choice of driftwood is apt; the field recordings join with guitar and cymbal, slowly growing in intensity, awaiting the lightning and bass.  This all changes in the 23rd minute as percussive electronic patterns take over the audio field, reflecting the line, “when a dance becomes a prayer”.  The storm is comforting because of the company; what once seemed like a threat has now become a blessing.

The series grows mystical as the photographer becomes the musician on The Ruins of Tallis, with Gareth Rees on text duties.  (ACL readers may recall Rees from A Dream Life of Hackney Marshes.)  “Something big has been moving through these ancient woods”, writes Rees, who beholds a vision of the supposedly deceased Duncan Sharp, riding a stag.  Fyans’ music backs the story with a long, thick, undulating drone, the third timbre shift in as many releases.  The music is haunted, lonely and dark, a perfect match for the tale.  As one listens, the lines are blurred between the physical and the spiritual, the past and the present.

Sonically related to this release is The Empty Room of Sietse Van Erve (Orphax).  While quieter, the single track operates as the skeleton of a drone.  The sound fits Murdo Eason’s text, which describes a place without windows or light, “a silent world of softly falling ash”.  One can imagine all the senses attempting to adjust, and failing; the sense of desperation and final surrender.  At times it seems as if an ancient church bell is tolled, its tone elongated into near-unrecognizable form, a reminder of one’s former hope.  By using sine waves, Orphax echoes the distortion of time found on Fyans’ release.

TVO returns for the fifth installment, Jack on Piano.  At the start, the sound has retreated to oblivion.  Eleanor Thomson describes a father gone, yet still present: not a ghost, but an echo, found in “traces, hints, breath”.  The longer one listens, the more the music emerges from the wood.  One can imagine the influence of a spectral, yet benign presence.  The feather represents the gossamer thread.  Distant orchestras seem to emerge.  Where is Jack?  When drums enter in the second piece, the lid is opened, and the ivories become apparent.  The timbre turns ambient, reflective, celebratory.  The veil dropped, we learn that these are the sounds of TVO’s grandfather, found on an old CD-R.  If the music reminds some of The Caretaker, there’s still a difference: this music is warm, personal, connected, like a duet between Nat King Cole and his daughter. 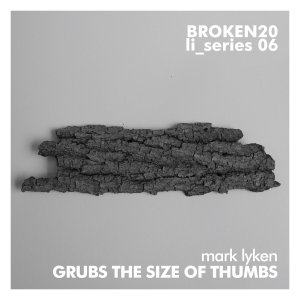 Fyans returns to prose duties on Mark Lyken‘s Grubs the Size of Thumbs.  We’ve reviewed Lyken before with projects The Terrestrial Sea and Mirror Lands.  The field recording aspects are less apparent here, but the full title of the piece lends itself perfectly to the listening experience:  “the bark felt loose and when I pulled it off I found grubs the size of thumbs eating the tree from the inside”.  Yes, this piece sounds exactly like that.  Fyans works with the grain, writing of “the mystery sound that you can hear late at night when the world goes flat” and “the weightless crush of dread”.  Grubs exposes the underside of music like the underside of bark: the sounds hiding beneath the sounds, the throttling microcosm of aural phenomena.  When a glass bottle is dragged across the floor, one is nearly grateful for the recognizable sound, even though it threatens.

By the seventh in the series, one can start to intuit patterns ~ those in nature mimicked by the rotating staff.  This time Law provides the text, Graham Dunning the audio.  Aggregate sounds like chemical tubs with angry bubbles.  The text describes “a strange hinterland of discarded tyres, odd effigies part-burnt, and brickwork”, all in muted shades of gray.  Together, the audio and prose paint a picture of discarded lands and objects, the dead snail on the cover intimating slow change that never reached fruition.  The piece is lovely yet disturbing; it seems to lack a sense of surrender, yet it reflects the surrender that preceded its conception.  In the 12th minute, a wail echoes like the sound of distant sirens that never near the scene of the crime.

The year winds down with Dirty Hope’s Songs for Sara Keller, the lightest of the releases and a kind set-up for the brightness of the winter holidays.  After all the darkness that has come before, it’s a relief to hear the music box and marimba.  In Alasdair Satchel’s prose, a child lies on a bed:  “Soft. Comfort. Safe.”  Once again, time and space are distorted, but this time, the miasma is as welcome as the swirl of fingerpaint.  As grittier sounds emerge without dominating, one returns to the artist’s moniker, which now seems apt.  Once again, as on Storm Katie, there’s an opportunity to dance.  The ghosts have been dispelled, at least for now; the world is filled with possibility and light.  In the closing minutes, there’s time for reflection as the child awakens to a brand new day.

More releases will follow in the new year, but we can’t imagine a better way to end the current one.  The more one looks, listens and reads, the more one experiences the li.  (Richard Allen)