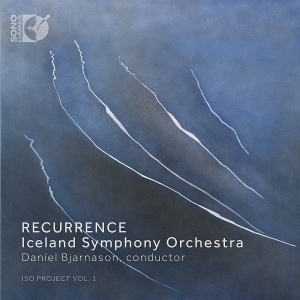 A sense of wonder develops when one realizes one is listening to one of the year’s best albums.  This takes a while to solidify ~ first impressions are hard to trust ~ but by the tenth play or so, it hardens.  While I’ve lost track of how many times I’ve played Recurrence, I’ve retained that sense of wonder.

Not that this should come as any surprise, as Recurrence has been one of our site’s most anticipated albums ever since its announcement way back on November 19.  This is the second Icelandic set from Sono Luminus this year, following Raindamage.  Recurrence highlights Daniel Bjarnason at the helm of the Iceland Symphony Orchestra, conducting pieces from Anna Thorvaldsdottir (another of our favorite composers), amiina’s Maria Huld Markan Sigfúsdóttir (last heard here on Nordic Affect’s Clockworking), Thuridur Jónsdóttir, Hlynur Aðils Vilmarsson and himself.  The album operates as a showcase for the entire nation, a gauntlet thrown down to the global music community.  Despite its many authors, the set flows perfectly as a whole, a credit to Bjarnason’s conducting skills as well as to the skills of the orchestra.  While listening, one yearns for a musical Olympics where all national orchestras might compete, each performing new music from their homelands.

When one reads that composer and flutist Thuridur Jónsdóttir has worked insects and infants into her compositions, one is unsure what to expect from her next work; suffice it to say that one is intrigued.  “Flow and Fusion” is a strong start to a strong set, a whisper building quickly into a scream.  The sound of triangles cedes space to swirling strings and buzzing electronics.  The first thrilling surge occurs less than three minutes into the eleven-minute piece, a foretaste of what is to come.  The mood is suspenseful, yet measured; chaotic, yet controlled.  The composition is a perfect example of why composers shouldn’t see film work as an ultimate goal.  The track is its own story, a self-contained drama that operates best as itself, instrument commenting on instrument, stanza on stanza.  Its awe-filled, awesome grandeur provides a perfect expansion of its title.

Hlynur Aðils Vilmarsson’ compositions also appeared on Raindamage, but the eleven-minute “bd” travels somewhere the last two compositions did not.  The last three minutes are a thrilling explosion of full orchestral involvement.  In order to arrive at this point, he earns the listener’s interest with a series of small twists and turns, sometimes dipping into near-silence, offering sounds that range from small footsteps (percussion) to large elephants (brass).  When those low marching notes finally hit, we recall his rock background.  The pulse pounds, emotion takes over, and all thought goes out the window, replaced by pure visceral enjoyment.

Maria Huld Markan Sigfúsdóttir’s “Aequora” may surprise those used to the more accessible works of amiina, but will be a treat for any familiar with the elegant “Clockworking” and “Spirals”.  Her sonic peaks arrive early and often, offset by slower, more contemplative segments of string.  Every surge brings a new wave of excitement, along with additional instrumentation.  First the brass elevates the strings, augmenting their power.  Then dramatic drums enter the fray, their rattle and rumble presaging even greater themes.  At this point, the tone shifts to something more sedate, a yearning for higher things.  The title is roughly translated as “the calm, smooth sea, even in times of storm”, and the composition offers a perfect reflection.  Despite all of the drama, the confidence of the composition keeps it on an even keel.  The boat will reach port, no matter the weather.  One need only stay the course. 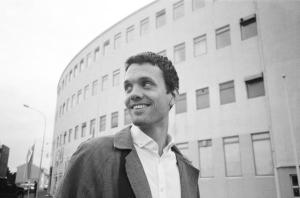 Is it humility that causes Bjarnason to wait this long before introducing his own composition, “Emergence”?  Yes, in part.  But the Icelandic music scene is also one in which community and collaboration flourish.  The success of one is the success of all.  Bjarnason needs no other adornment.  Others have stretched their hands to him, and now he stretches his hands to others.  This being said, “Emergence” (first heard on Over Light Earth) is an astonishing three-part composition, the opening part heavy enough to anchor any boat.  To hear such emotion erupt in such a short piece is to admire the restraint that has preceded it.  Again we credit the composer, this time not only for his composing and conducting abilities, but for his sequencing skills.  The first movement is the album’s center, offering the segment that puts the album over the top.  After hearing it, one can’t do without it.  The second and third parts go even further, adding contrast and complexity.  As the second movement descends into the depths, it drags the listener happily along to a state of hypoxia.  The third is like the rescuing diver, plunging in with a fresh canister of oxygen.  The longest of the movements, it falls slowly through the layers of sound before reaching the one it intends to save.

Anna Thorvaldsdottir’s “Dreaming”, first heard on Rhizoma, closes the album down.  Instead of a coda, the piece offers a new launching point.  “Dreaming” invites the listener to look back ~ nay, listen back ~ to all the experiences that have come before, and to consider what might happen next.  Soaring seas, sinking bodies, danger and rescue ~ would we want this life, or would we wish to stay in port?  As the saying goes, “a ship is safe at port, but that’s not what ships are for.”  And Thorvaldsdottir has never played it safe.  Her works dance on the edge of expectation, venturing out into directions unforeseen.  Instead of wrapping her compositions in tidy bows, she offers listeners the joy of unwrapping sounds.  After four minutes of beautiful lull, she allows the drums off the leash, like an impending eruption or a feverish dream.  When she pulls back, it is as if surveying multiple plumes of smoke and fire.  “Dreaming” thus becomes the sonic expression of Eyjafjallajökull and Bárðarbunga, paired with the threat of Katla, Hekla, and Grímsvötn.  The next eruption is on the way.  No one can predict where or when.  How then shall we live?  Thorvaldsdottir’s answer seems to be dangerously, bravely, fully.  As the album concludes, her composition pushes us outward rather than inward.  Seldom has a set felt so completely alive.  (Richard Allen)