Acoustic Cameras: Windows on the World 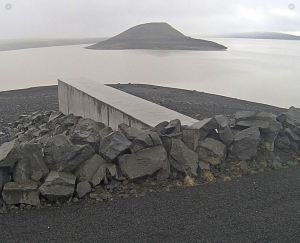 Acoustic Cameras is the rare project that says more about the listener ~ who in this case is also the viewer ~ than about the creators.  At the time of this writing, nearly 100 artists have participated, contributing works that range from mysterious to beguiling.

In creating this interpretive meld, this “sound annexation project” intercepts the signals of global webcams, which stream live on the site.  Artists are then invited to contribute soundtracks to the live streams ~ a challenge given the fact that the scenes remain the same while the images are always changing.  Some images are crisp, others blurred; some are smooth streams, others frame-by-frame.  Some never buffer (depending on one’s computer); others pop right up.  Visitors to the site choose from a list of artists and sites, some of which are doubled.

Over the course of the last month, I’ve looked at all of these and zeroed in on a few.  In so doing, I’ve learned a few things about myself, some mildly unpleasant.  The project makes one a voyeur, and I’m ashamed to admit that I’ve played right into its hands.  Like most people, I prefer the images that unfold smoothly, but I’m willing to make compromises depending on the visual subject.  I especially enjoy the water scenes, which remind me of my local surf cam.  The images of Cape Nosappu (Japan) are paricularly calming.  Yet in a Stateside setting, when a group of young women decide to swim by a pier, I find myself frozen ~ first guilty, then entranced.  And I’ll admit to checking in on the Herndon elevator from time to time, remembering the famous Aerosmith video, although I’ve caught nothing more salacious than the ill-fitting jeans of a large, middle-aged man; and on another camera, some grainy people making out on an Internet bench in Poland.  When I stumble on a play area, I swiftly click away ~ something about this just feels wrong.  The same holds true of the nursing home, but for reasons associated more with sadness, a mood beautifully captured by the softly wandering tones of Cocoon.  Even the moniker fits.

While no audio controls are included, the pieces tend to be short.  The inability to fast-forward is at first frustrating, but teaches patience.  In the 21st century, we’re used to zipping through everything, but this site offers a different manner of taking in one’s surroundings, both visual and aural.  Not only does one have to wait for “good things to happen” on these webcams, one has to wait for the songs to develop.  Go no further than the very first track, from 2kilos &More, to be rewarded with a full-fledged composition.  But why are are waiting for good things to happen?  Can’t we just live in the moment?  Clair Obscur’s club music (literally played over images of a club) is not for dancing, but feeling.

Much of the music falls into the realm of ambient and drone, offering some odd juxtapositions.  For example, one would never think to blast Bertrand Gauguet and Philippe Poirier’s drone over the loudspeakers at the Moscow snowpark.  But the music adds an aura of menace, connected more to the viewer than to the subject.  Die Form ÷ Musique Concrète offer a violent track over a view of the Hiroshima Peace Park.  Sirens permeate eRikm’s piece, but the crowds make no move to scatter.  Cathryn Boch & Alessandro Bosetti’s trill electronics sound like cats, but are laid atop images of fish.  Christoph Bailleau paints synthetic washes over images of dogs playing in the Pampered Pet Hotel.

Conversely, much of the music is a perfect match ~ for example, George Moraitis’ crunching acoustics over an ant cam or Fred Bigot’s pulsing score to a skate park.  Köhn offers sanctuary music that fits the setting, without being the standard fare.  And the artists who provide dueling scores raise intriguing questions: for example, what’s the most fitting score to Foucault’s Pendulum, and do either Jarboe or Jean-Jacques Palix succeed in capturing it?  Is there a better piece to accompany a view of St. Olaf’s church than the choir of Les Voix Animées?  Silly questions are raised as well.  For example, while it’s obvious why one would mount a webcam to track a manatee, why is it necessary to train one on an incandescent bulb?  (Incidentally, the accompanying musical piece by Valérie Vivancos is one of the project’s newest and longest, as well as one of its best, filled with buzzes, beeps, dialogue, traffic and ping pong balls.)

There’s so much solid music here that we hope a compilation will be forthcoming.  Bader Motor offers Middle Eastern singing as accompaniment to a train set.  A stringed hymn scores a border crossing in Austria.  The Dead Mauriacs send foghorns over the view from King Albert Tower.  The subject matter inspires a multitude of distinctive pieces, as well as some inside jokes, one of the most obvious being Valentine Carette’s post-rock piece over yes ~ a mountain.  Some may head straight to the bigger names, such as Francisco López, Pinkcourtesyphone and Year of No Light.  But there are many treasures waiting to be discovered from unfamiliar names as well. 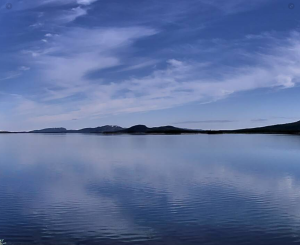 Sometimes, in all of this, one arrives at serendipity.  By chance, I happened upon a serene sunset at Sweden’s Lake Hornavan, five hours before my own sunset.  Eveb from Wild Shores provided the soothing score.  This was a reminder of the fact that a sunset is always happening somewhere.  Later the same night, the lake looked more foreboding, and this time, the score of YRSEL was more appropriate.  In like manner, Pierre Bastien’s cricket-filled “Entomology” is best heard at night.  Over time, checking in on my favorite sites kept me mindful of the activities in different countries at different times; but oddly enough, considering the voyeuristic nature of the project, this also made me feel calmer, more connected.  When would the lighthouse burst into action?  When would the sheep pass through the gate?  When would the plaza empty?  When would humankind realize its commonalities?

Acoustic Cameras is a project that one can get lost in hour after hour, day after day.  More than a simple collection of images and sounds, it’s also a work of sociological importance, a metaphor for connection and disconnection, a set of windows on the world.  (Richard Allen)