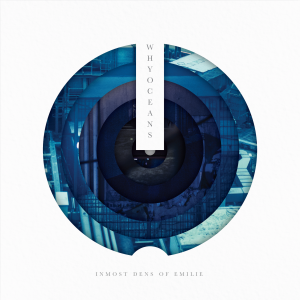 Once in a while, without warning, we receive a sweet post-rock surprise.  Last year, it was the eighth album from Wang Wen, and this year it’s the sophomore album from Macao quintet WhyOceans, mastered by Magnus Lindberg (Cult of Luna).  Inmost Dens of Emilie restores our faith in the continued creativity of the genre.

What makes the difference?  It’s no surprise: extra instruments, with a nod toward modern composition.  Opener “Another Wind” contains no guitar, drums or bass, just sweet piano, violin and cello.  The minute of waves that launches the second track reminds us of the band’s name and eases us gently into their post-rock atmosphere. Ah, yes ~ here come those lovely, languid guitar passages, the drums and bass finally making their appearance three and a half minutes into the song, a full eight minutes into the album.  This time, the strings are held back until the end, reminding us of a certain classic album from ten years ago ~ Yndi Halda’s Enjoy Eternal Bliss.  There’s a clear comfort in knowing that the band will take its time, to get there when it gets there, to provide a meaningful listening experience that unfolds like a book.  The cover construction is a visual representation of its sonic chapters, portholes within portholes ~ a clean, die-cast look.

WhyOceans makes a brave call concerning its title track, separating the 21-minute crowd pleaser into two halves, bracketing two other tracks.  The decision unites the album as it presents the opportunity to return to themes ~ a narrative thread wrapped around the set.  Perhaps it’s only coincidence, but the presence of birds in the first half of this piece, coupled with those found on the recent ⊙ album, makes us wonder if this is a new trend crossing from the ambient world into post-rock.  The piano provides a plethora of emotion, raising the track above its contemporaries, sounding like a song within a song and reminding us once again that post-rock is not dead, it just needs new infusions to stay healthy.

Another of these infusions is the presence of flute on “Chasing Palace”, an underused instrument in post-rock and in rock in general ~ consider the fact that when asked about “that rock band with the flute”, most knowledgeable rock fans will immediately respond, “Jethro Tull” ~ but when then asked about other rock bands with flute, fall silent.  (Hint: there were a few in the 70s.)  The difference here is that the flute is not used as an aggressive rock instrument, but retains the timbral shape of modern composition.  Not that WhyOceans is completely removed from that time period ~ the organ and single minute of singing on “Farewell to My Urban Life” are throwbacks to the days of prog.  Fortunately, the band avoids the monumental misstep of Yndi Halda on its sophomore set, and keeps the vocal short.

The profile of post-rock may be on its way down, but this band is on its way up, bucking the trend in a marvelous way.  (Richard Allen)