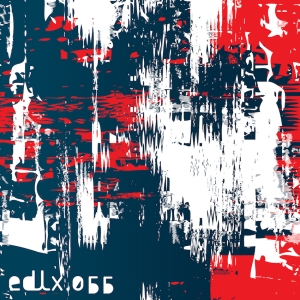 A triple 12″?  Yes, that’s the way to go on this album.  The wider grooves allow for deeper bass, while the hum and crunch have room to expand.  Social Decay is part of a new resurgence for industrial music, following recent stunners from JASSS, Belief Defect and Pact Infernal.  This new industrial is a bit like the old ~ AnD taking hints from classic artists such as Download and yelworC ~ but folds in multiple influences from genres including drone, grime and film scores.  Overture “First Element” could even be mistaken as a new Ben Frost cut, with angry machinery reacting to the poke of a butter knife.  But after a brief flirtation with what some might call the industrial mainstream on “Corrupted Structures” and “Anarchic Rhapsody”, spewing distorted, sublimated lines over agitated beats, AnD settles into something more thrilling as it lets the music do the talking.

“Corrupted Structures” is also of interest because it demonstrates the influence of Electric Deluxe leader Speedy J, whose own techno splintered into industrial once upon a time with the Patterns Remix.  (Jochem, we remember!)  But Side B is where we become hooked, as “Corrugated Structures” offers the uncompromising percussive power we associate with the genre.  Drum patterns pound and punctuate, seemingly unsettled despite the steady tempo.  The rawness of the track makes “UFO” a perfect foil, unfolding like a grudge match between gamelan and gong, machine gun and synth.  This sort of abstraction is good for industrial music, too often associated with its most accessible artists, whose songs are rife with choruses and easy to dismiss.  For example, we appreciate KMFDM, but doesn’t Hell Yeah sound like a redneck anthem?  Set this against “Pandemonium”, a real stormer and electronic body mover.  The former is the earworm, but the latter is what we want to hear again.

A spiritual descendent of Throbbing Gristle, AnD was already making angry music before this spring’s Manchester bombing, but now they have a real reason to channel their rage.  While one could make the case that nearly all industrial music is about social decay, the duo’s second album has arrived at a time and place that hearkens back to the early days of punk.  The masses are once again oppressed by the proletariat, the difference being that they are doubly mad, having bought into the illusion that all was well, that we were headed clumsily but steadily forward, leaving behind isolationism, xenophobia and the whole reason for industrial music in the first place.  Now it seems we need this music more than ever ~ a channel for our aggression that doesn’t hurt anyone, disillusionment turned into dance music, and ironically, power.  Once the excess aggression is shed as sweat, we can think clearly once again.  Don’t be fooled by the hammer and anvil of this album.  With titles such as “Resisting Authority” and “Taking Control”, it’s less about social decay than the hope of social restoration.  (Richard Allen)