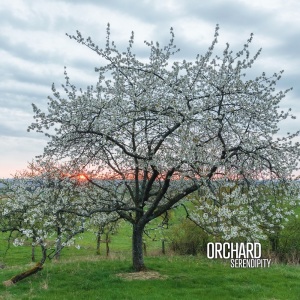 Serendipity is a lengthy album, but a worthy one, the eighth installment in Ici d’ailleurs’ Mind Travels series. And travel it does, tracing the seasons of a real orchard through impression and song.  The photography of Francis Meslet (whose art book is about to be released through the label as well) is a welcome adornment.

The group is comprised of Aidan Baker (guitar), Gaspar Claus (cello), Franck Laurino (drums) and Maxime Tisserand (clarinets), each members of their own bands yet united for this occasion like a special group of X-Men recruited for a cause.  The disparate nature of their bands is responsible for the shifting timbres, which begin in ambience and end in post-rock, although hints of the latter can be found throughout the early going as well.  The four-part opener “A Day Staring at Eternity” emphasizes that sense of drift, although the title is a conundrum: if eternity exists, what is a day?  By the fourth segment, Claus’ cello begins to sing a lament for a passing season, while rousing the drums from sleep.  A late bout of distortion seems to indict the idea of just staring.  The future is not set in stone; there’s still time to adjust the course of one’s life, or the life of the planet.

And still the seasons pass.  And still the orchard stands, bearing mute witness to all it sees in its finite world.  But the trees also set their seeds adrift upon the wind.  The next tetrad, “Drawn with the wind”, is immediately more active, even tribal in nature, remembering the old ways.  In these grooves we hear hints of another French collective, Oiseaux-Tempête.  The piece gallops through its opening movement, settles in its second, revives in its jazzy third and foreshadows doom in its heavy finale.  Yet while the quadriptych is tonally different from its predecessor, it creates the same feeling of time disintegrating, minutes collapsing into piles of disorganized shards.  The hinted apocalypse comes to bear in the 21-minute monster piece “After all the sun is awakening”, which starts like a trawl through the deep sea before emerging on land, again on the back of the cello, like a fish discovering tiny leg buds.  If we’re still in the orchard, we’re caught in the middle of a black, black night.

Two accessible tracks close the album, exposing the influence of Tisserand’s band Chapelier Fou.  The tempos are upfront, the timbres rhythmic, especially on closer “We Host You”, which on its own is not wide-angled enough to provide a full impression.  Think instead of four seasons, one tree; four artists, one album.  The trunk is stable, but the flowers are in flux.  (Richard Allen)