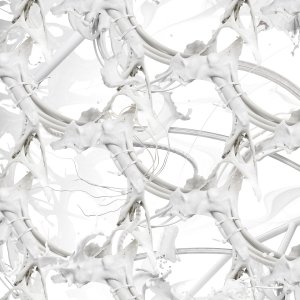 Is it too early to declare that 2017 has been a great year for women in electronic music?  Berlin’s Ziúr is only the latest to release a stunning debut album.  The beauty of what we’ve been hearing is that each of these artists has a signature sound, and follows her own muse.

U Feel Anything? is a tale of two albums.  The first half is abstract, abrasive, far from accessible.  The second is a nearly military excursion, dominated by drum patterns and an industrial flavor.  “U” may not feel anything at first, but U will by the time the album ends.

We guarantee no one will say, “Human Life Is Not A Commodity’ is my jam!”  It’s not a jam, but a collection of whispers and words over a backdrop of struck bells and synthesized tones.  The title track offers the first point of access, but its starts and stops may mystify dancers.  Ironically, it’s a cold track, with little clothing to warm the skeletal structure.  Such will come in due time; for now, Ziúr is making her declaration.  Early photos were straightforward; later photos are shrouded, in the manner of Sia and Gazelle Twin, who prefer to be defined by their artistry rather than their appearance.  The same holds true for the music.  Why does it have to be pretty, or polite, or straightforward?  Even the vocals refuse to be pigeonholed, as they meander about, fractured and pitched.  “Body of Light” may be pop ~ it even features a pop singer ~ but it’s not radio music.

The only problem with front-loading the experimental tracks is that few may notice; in the digital age, the disintegration of the album proper means that many will simply go for the highest rated or more accessible.  “Cipher” is the first of these, pure percussion with scribbled electronics, sampled guitar and a melody that sounds like sneakers on a gym floor.  Like the title track, it clocks in at four minutes, the perfect length for a single.  Has Ziúr been holding back?  Of course she has; as a DJ, she’s concerned with the full experience.  “I believe you can only tell that something is harsh when you have a soft side to compare it to,” she writes.  Yet acclimation can strip harshness of its power, which is why the artist offers contrast.  “Don’t Buy It” is as aggressive as it gets, but the following track begins with bells, and seems to include those very words: soft and hard.  Then out of nowhere, a minute and a half to go: a chorus.  The dance floor is now full.

The value of producers such as Ziúr is that they bring something new to the table.  Dissatisfied with the current array of sounds, they find, or invent others.  “Drawn” is distinguished by a carbonated wave, as if the ocean were made of soda.  It once took years for new sounds to filter into the mainstream. We’re going to trace the progress of this one.  In the meantime, we’re sure that Ziúr will be on to something completely different, far before the tipping point has occured.  (Richard Allen)