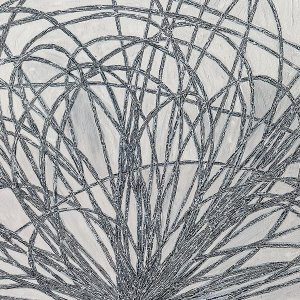 This album is pure enjoyment ~ so warm, so inviting, so enveloping that the struggle behind it may be obscured.  Icelandic composer Ólafur Josephsson has taken a long sonic journey to arrive at this point.  Originally the sole member of Stafrænn Hákon, he has since branched out.  In one sense, Hausi is his second declaration; in another, it’s a culmination.

I first became aware of Stafrænn Hákon in 2004, when I purchased Ventill / Poki on the basis of the cover alone.  What I hadn’t known at that time was that the album was the artist’s first studio work, as well as his first extensive collaboration.  What I did know was that the album was an effective blend of ambience and post-rock, the trombone its secret weapon.  This seemed to be the start of something new, but in the ensuing years Josephsson began to add more vocals, culminating in the pop-leaning, lyric-heavy Eternal Horse in 2015.  This is what makes Hausi such a surprise; it’s as if the artist went back to the drawing board, revisited Ventill / Poki, and decided to write an alternate history.  One can trace the outlines of this history through “Járn”, “Glussi” and “Vegur” (from Gummi, which ironically also includes a track named “Hausi”), “Minning um deig”, “Unwind, Tender Dog!”, “Bright”, “Val Kilmer” and “The Jerker” (from Sanitas) and “Frigid / Bag” and “Falkor (from Eternal Horse).  (We might also include “Saltvatn”, “Hvarf 12”, “Soft Fence”, “Lusher” and “Before” from Prammi, although that home recording exists outside the story proper.)  The blueprint never disappeared; it was merely sublimated.  And now it comes out to play.

The joy is evident in every track of Hausi.  It’s as if the band (now a quartet, occasionally expanding to a sextet) has had a great burden lifted from their shoulders, and is feeling carefree and exuberant.  The album seems purely Icelandic, an amplification of the moment in Sigur Rós’ “Sé Lest” when the brass band marches across the stage, as seen in Heima.  The irony is that while one Icelandic band has (for now at least) abandoned the strings and brass, another has brought them to the fore, to the benefit of fans who prefer the fuller sound.  To those outside Iceland, such tonal shifts may seem scattershot, but within Iceland they are common; the entire nation encourages experimentation.  Consider for example the sonic distance between Björk albums, but also the fact that the upcoming Utopia seems a return to the palette of Vespertine; or the difference between Hjaltalin’s Sleepdrunk Sessions and Terminal.

The first public taste of Hausi was “Rafall”, which is fittingly the album’s opening track as well.  The richness of timbres is immediately apparent, as is the instinctive interplay between the players.  This rhythmic, bell-laden track is nourished by a surprising guitar break at 2:06, a reminder that Stafrænn Hákon is after all a rock band.  But when the earlier patterns return, one begins to notice differences: the snare drum replaced by the bass drum and a deeper tone, like the difference between an LP and a 12″.  Halfway through “Duft”, the brass takes center stage; now we’re not only listening, but smiling.

Iceland can certainly use this sort of music as a counter-balance to government fluidity (another prime minister?), environmental concerns and the mixed blessing and curse of the tourist boom.  Stafrænn Hákon seems to be remembering a happier Iceland (once known as the happiest nation, since uprooted by Norway) by embracing ebullience rather than just talking about it.  Many of the compositions are built around Lárus Sigurðsson’s “magical harp”, and no one ever talks about a depressed harp.  As far back as Biblical times, the instrument was seen as a source of spiritual inspiration (2 Kings 3:15), and in this case it is a source of compositional inspiration as well.  But whether one chooses to view such things as magical or spiritual is immaterial; either way, the end result is buoyancy.  The swiftest tracks uplift, and even the slowest (“Pollur” in particular) act as lullabies, balms to the soul.

To this listener, Hausi is a homecoming: a return to an earlier template, yet with different adornment and a happier ending.  Everything that was remarkable about Ventill / Poki is here and more.  The wordless vocals of “7/4 Önd” are like that of a parent to a prodigal.  The band has recovered its signature sound, and now we feel as if we’ve come home as well.  (Richard Allen)