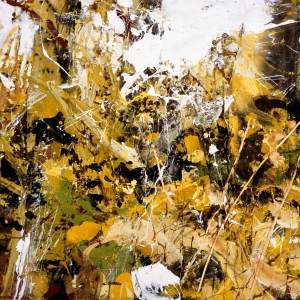 We love seasonal albums: sets that reflect a certain time of year, and are released at that time.  Our last pure fall album was Himmelsrandt’s 4 Moments & Rain; this one is a worthy successor. One need look no further than the leaves on one’s lawn to find a match for the cover art.  This is music for the full spectrum of fall, from color to timbre to emotion.  Sadness and exultation mix like red and yellow in a wind-swept pile of piano and viola.

Rachel Burn’s choreography for “Cynefin” reflects this tonal swirl.  First there’s a focus on the leaves, a drive through fall.  Then a deliberate, appreciate walk.  The artist moves beneath the tall trees as their colors turn, gracefully greeting ancient bark, gazing upward as if accepting  the season to come.  Slowly, inexorably, she edges toward a dance.  The music follows suit, growing from restrained ambience to the full bloom of modern composition.  Every step ~ barefoot and literal, musical and metaphorical ~ is suffused with tender gratitude.  The title is a Welsh word that refers to belonging and to the longing to belong, to place and to the yearning for place.  The artists involved (including cover artist David Tress and violist Faith Brackenbury) all hail from the Shropshire area, making the disc a thoroughly home-spun affair.

Tiny Leaves (Joel Nathaniel Pike) is no stranger to long pieces, but this is the first time he’s filled an album with them.  The average track length is ten minutes, allowing ample space to develop ideas and create tonal atmospheres.  Given such space, Pike explores themes and variations on themes, often in incremental shifts.  Only on “If We Play” do the repetitions get in the way, as the central piano pattern overstays its welcome; the other pieces allow a greater amount of sinking and resurfacing.  “Found Song” has a beautiful shape, traveling through a golden forest before returning to its starting point.  The xylophone shifts the center of the piece from contemplation to ebullience, a feeling that remains even after it has made its exit.  But the flourishes of “Broad Places” make it the standout piece: slow notes contrasted with fast like varying perceptions of time.  As the seasons change, we often feel as if the calendar is rushing forward, but trees and leaves operate at their own, more deliberate speeds.  A few minutes into the track, the piano and viola grow closer in tempo as if to approach each other on common ground.  When they meet in the middle, the effect is delightful: a lot like coming home. (Richard Allen)