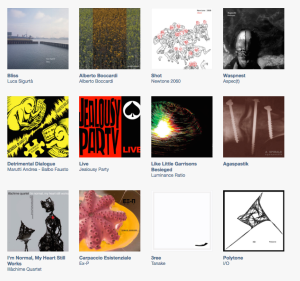 Fratto9 Under The Sky Records, or just Fratto9, is an Italian label founded by Gianmaria Aprile more than ten years ago.  Gianmaria is a member of Luminance Ratio, a psychedelic drone supergroup currently comprising members Andrea Ferraris, Luca Mauri (I/O, Two Dead Bodies) and Luca Sigurtà (Harshcore). They put together LCNL 079: Luminance Ratio’s Honey Dream, a mix of from jazz, hip hop, hardcore, and new electrtonics and dub, as well as some of their own music. (Listen/Download at Soundcloud ) The label has released some really stunning records over the last decades, and continues to do so at a slightly slower pace.

The label has just made the sold out records in their back catalog available for free download at their Bandcamp page. Some of these records and artists, including Luca Sigurtà, Terrapin, Luminance Ratio, Aspec(t), and Alberto Boccardi have been reviewed here over the years and may be familiar to our readers, but many others have likely flown under the radar. Newtone2060 and Jealousy Party in particular stand out for their creativity and energy, though I strongly encourage our readers to take a deep dive into their back catalog. Enjoy. (Joseph Sannicandro)

Artwork by SANAIR
Design by Simone Grillo
Screenprinted by Frohike.it

Luca Sigurtà is very active in the electronic music scene, playing solo and with the bands Harshcore and Luminance Ratio. In Hookers he composes a cold and frozing atmosphere, with gusts of noises and drones together with a bare drum, the song ending surprisingly with an ecstatic mood.
Noise veterans Panicsville plays Paura nella Città dei Morti Viventi mixing old schoool industrial together with their strong oniric and terrifying fantasy: organ, synth drums and samples are used to compose a song that can give you a perfect idea of their great narrative skills.
Printed on a vinyl, in limited edition (100 copies), artwork by Sanair, silkscreened by Frohike.

This work comes from some recording sessions in Giovanni’s Studio.
Later subtlety edited without any overdubs, just choosing the most suitable parts, noticing something evolve from the session, forming a solid arrangement.

Versatility has always been what sets Luca Sigurtà apart. His new solo album ‘Bliss’ out on Fratto9. Recor- ded in 2011 and Mastered by Giuseppe Ielasi, this new offering exhibits his most dreamy side. There are five tracks which sit between cinematic drone music and that of Angelo Badalmenti.

It a soundscape through a sunny afternoon in the North of Europe, filled with white light that illuminates the port and with the presence of distant noise.

Soundscapes that alternate unstable vibrations of the earth’s surface to static animal references.
Acoustic instruments, electronics, voice and field recordings, in the first work by Alberto Boccardi, tell emotional phases grown from the memories but living in the present.
The use of sound is purely functional to instinct, and to the desire to define the boundaries of otherwise ephemeral images.

Extracts of Charles Bukowski’s poetic works overlap on the interweavings and multiple stratiﬁed references in the trio’s music, thus becoming a recognizable and characterizing feature of this work.
Bukowski’s poetry, rich in meaning and suggestions, adds up as a further reference, coherently with the trio’s musical aesthetics.
The representation of man’s decadence and, at the same time, the quest for and acknowledgement of beauty in the details and crevices of this general condition, are the two opposing themes that act as the album’s ﬁle rouge.
The materiality of Bukowski’s use of language adheres surprisingly to the sound of Newtone2060, who investigate and develop this dirty and only apparent randomness.

Their music shares the timbrical research and the execution control typical of some radical impro music (Pateras/Baxter/Brown, John Butcher, Jim Denley, Bruce Russell,..), but meets the visceral intensity and the obscure poetic of the new aktionsm and of noise music (Rudolf Eb.er, Dave Phillips, Joke Lanz) as well as the research on analog devices and concrete sound materials of the sonic poetry (Lionel Marchetti, Jerome Noetinger). The result is a fascinating and inextricable forest of sounds: frenetic structures, noise explosions, ancestral cries, an unceasing perversion of the soundscape and the time stream.

Recorded together in the authors’ studios and then worked out in seclusion between 2007 and 2009, the tracks on “Detrimental Dialogue” were subsequently redefined during a one-week long collective mixing session rigorously made with analogue equipment and precious outboard effects at Fausto Balbo’s studio.
The album presents four experimental electronic pieces whose exact classification eludes us since their musical contents are rich of the most disparate suggestions.

Jealousy party, active Florentine ensemble from 1995, rape the suggestions of the free music (jazz and not only), avant-rock , the disturbed and unsociable electronics, squirts of songs, saxs, laptop and cds in flames and histrionic vocal manipulations. The mutant project expresses with delirium and destructured transparency the synthesis among creative astractism, expressive urgency, mad avant-gardist, theatricality and punk attitude.

Several fine musicians have given their contribution to the album. Among them, some important international artists like:

Mark Stewart (voice of Pop group and Maffia)
Graham Lewis (voice and bass player of Wire)
Rhys Chatham (avantgarde musician from New York)
and Salvatore Bonafede (one of the most well-known italian jazzists).

Paolo Ferrari – recorded it all at Poll’s boutique, sang at the end of 3, played analog synth here and there and did most of the mixing with us complaining on his sofa
T. J. Lipple mastered this cd in Washington d.c. at Silver Sonya
Umberto did the layout and took all the pics of the booklet