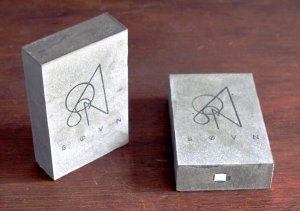 The SØVN collective has become known for careful attention to packaging, a recent highlight being the wooden box edition of Amelia Devoid’s Hypogeum.  But their latest release takes the cake.  The tape is enclosed in a concrete box that can’t be opened without breaking it.  (Be careful!)  We haven’t seen such a thing since we received a USB stick in a bar of soap.  The presentation is a commentary on interaction, permanence and the tactile; it also challenges collectors who prefer to retain a pristine copy.  Buy one to keep, one to crack, yet you’ll never know for sure if a cassette was in the second one!

MYMK‘s music is a perfect match for the medium.  The Brazilian solo artist uses sonic fragments like pieces of clay.  The fact that much of the album is vocal is obscured by the destruction of ordinary signposts.  It’s as if the artist took each segment of song, dropped it and allowed it to shatter before sweeping up and rearranging the pieces.  Eschewing drums, he uses shards of sound as percussion, which first attack in “In Flares, Anew”.  The deep booms may be the resonances of amplified echoes, rather than the original samples.  The title reflects the method, as The Memory Fog refers to both past and present: the inability to recall with perfect accuracy, smudged by an overload of thought.

The mood is claustrophobic, as if the protagonist is struggling ~ and failing ~ to recall the way out of a maze.  No direction is offered.  Normal sounds are distorted.  The senses are scrambled, and nothing is clear.  One can imagine a person suffocating inside the box.  But by the time the box has been broken, he has become so acclimated to his condition that he still views it as his home.  This is a prison of his own making, the psychological box in which he may die.

By alternating drones with electronic tempos, MYMK moves between torpor and action, offering what seems like false hope followed by harsh reality.  The harshest piece, “Tar-Feather”, comes across like machine guns fired from a prison tower.  Is there a way out?  Yes.  But will it ever be found?  Only by reexamining memories in the same manner as the artist reanalyses snippets of sound, viewing them from every angle until a path to wholeness is discovered: an aural and spiritual metamorphosis. (Richard Allen)