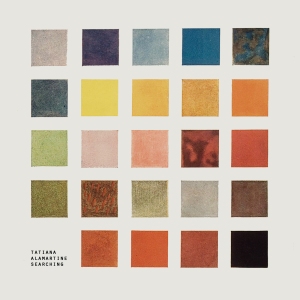 We tend to roll our eyes whenever we see Nils Frahm name-checked in a press release; but this time, the comparison rings true.  Tatiana Alamartine is the real thing, and while Searching may be more “Ambre” than “Tristana”, her Bosendörfer pieces do share the timbre of Wintermusik.  The artist plays a lot of notes with a lot of feeling; even the two-minute tracks hold more ideas than many tracks twice their length.  While this is only her debut album, we already have high hopes for a grand career.

The famous Viennese piano can make almost any performer sound better, but only an already accomplished composer can sound great.  There’s obvious love in the way Alamartine approaches the ivories, often reluctant to end a piece, giving it a farewell kiss, as in “Mindly”.  During “All at Night”, we begin to hear the flakes fall in flurries of notes, rapid yet tender.  Again she retreats at the end, shares a wistful goodbye.  Four of the subsequent tracks will top out at under a minute, connective sketches like bonding ice.  One wonders what she would do with a suite.  To hear eighteen tracks in forty minutes is nearly maddening; one pictures sheet music madly transposed and strewn about the room as new ideas blow through the window, interrupting the old.  “Looking Forward” is only as long as a heartfelt embrace, leaving one simultaneously satisfied and wanting more.  But of course this is a compliment to the composer of this debut album; far too many composers have only a few ideas and stretch them too thin.

Paskine’s lovely cover art offers swirling colors in regimented squares, a departure for the label.  This is a great way to introduce VoxxoV’s Acoustic Collection, as the impression is one of different moods all found in the same place.  And Alamartine does shift gears in the middle pieces, switching wonder for contemplation in pieces such as “B”.  There may have been a missed opportunity here, as the number of shades is roughly analogous to the number of tracks, but it’s still fun to imagine the pairings: slate blue for the melancholy “B”, peach pink for the tentative yet willing “Space Work”, sage green for the confident, meadow-like “Pieds Nus” (“Barefoot”).  One must purchase the CD to receive the bonus tracks, but then one gets extra colors as well, a double bonus.  Among these is the ironically titled “Save It Quickly”, which is longer than the six shortest tracks combined, but serves as welcome evidence that Alamartine is capable of creating sustained pieces that enchant throughout their length.  The other, simply titled “Song”, is her most pop-leaning, major-chorded piece, a hint at her crossover potential.  We’re looking forward to hearing more from this new talent, as well as from the Acoustic Collection, but Searching is a wonderful start for both.  (Richard Allen)