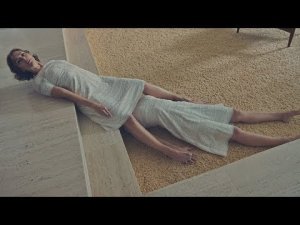 Google “Best Music Videos 2017” and you’ll find a lot of love for Kendrick, Jay-Z and Björk.  But where does one go to find the instrumental stuff?  We’re on Vimeo daily, looking for the finest visuals, which we collect here for your viewing pleasure.  On this page, you’ll find flying, leaping, dancing, woodcutting, and animation.  There’s love, loss and even murder.  The tempos range from the slow to the swift, the images from the beautiful to the bizarre.  A few have been featured in our reviews, but many are new discoveries.  And now, please enjoy our selection of The Year’s 10 Best Music Videos!

Toposcape
Music:  “Midnight” by Caravan Palace
Google Earth Edit:  Adnaan Jiwa
Toposcape was also filmed about the earth, but the song and video are polar opposites to those above.  The video contains over 4000 Google images sequenced and edited as a backdrop to a jazzy, upbeat dance track.  A personal pleasure is the similarity of the crop circles to a set of vinyl records.

Luca D’Alberto ~ Wait for Me
Director: Jem Talbot
Production Company: Pinzutu Films
The images are simple, and yet surreal.  Multiple stories are shared, some straightforward and others enigmatic.  It’s all about hands, from tender hold to fevered clutch and finally to surrendered drop.  The forward-leaning trajectory of the music makes a perfect companion.

Com Truise ~ Propagation
Directed By: Will Joines & Karrie Crouse
Written By: Karrie Crouse & Will Joines
Starring: Trieste Kelly Dunn
With: Stephen O’Reilly
Cinematographer: Zoë White
Producer: Jonathan Figueroa
Colorist: Josh Bohoskey / The Mill NY
The spookiest selection on this year’s list introduces a Stepford Wife who is also eerily reminiscent of Ava from Ex Machina.  Those familiar with Tom King’s take on The Vision may find this a worthy twin.  Is this really what husbands want of their wives?  And what might their wives want in return?

WoodSwimmer (Bedtimes Music Video)
Director:  Brett Foxwell
Edit & Music:  Conor Grebel
Typography:  Rowan Ogden
Who knew wood could flow like water?  In the hands of Brett Foxwell, it does.  He describes the work as a “tedious process,” but the results are sublime.  “WoodSwimmer” is the year’s most distinctive video, a viral sensation that justifies the time spent in production.

Max Cooper & Tom Hodge ~ Symmetry
Director:  Kevin McGloughlin
The first of two videos on our list from Max Cooper’s audio-visual Emergence project, “Symmetry” is the video we wanted to see way back when all we had was a still.  If videos could be friends, this one would probably hang out with “Toposcape” above, sharing its love of swift editing and a hyperactive pace.  The song and video are perfectly synched, and inspire immediate repeat views.

Max Cooper ~ Order from Chaos
Director:  Maxime Causeret
The rare video that both improves and enhances its source material, “Order from Chaos” amplifies the connection with rain and growth, while providing a wealth of color and movement.  The edit (half the length of the original track) retains all of the distinctive features with none of the repetition.