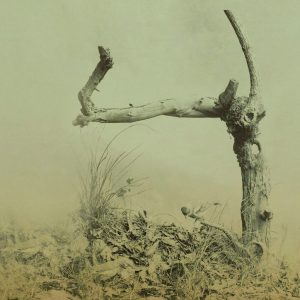 2018’s first great drone album comes from Zenjungle (Phil Gardelis) and extends the genre’s current hot streak.  Political disruption, environmental degradation and the refugee crisis have been terrible developments for humanity, but a great inspiration for artists.  Like recording artist Constantine, Gardelis is from Greece, and has been dismayed by the crumbling of public trust in the wake of a disastrous election.  (English-speaking nations, you are not alone!)  Fragmented Lives is a sonic reflection of its title, a recognition of the “new normal.”  Yet as with many drone releases of the past year, it is also a statement of hope.

The album can be enjoyed in digital form as a single 36-minute track, but the “ultra-clear” vinyl underlines the distinction between the movements.  “Anticipation” is moody yet determined, jittery yet solid.  The piece reflects the time just before the election, an electric atmosphere charged by vaporous dreams.  Saxophone passages plunge the listener into alleyways of noir.  The tension is palpable.  Static charges, feedback and fuzz stalk the perimeters like bad feelings at the gates, waiting to break through.  The populace hopes for the best while preparing for the worst.

And then the worst happens.

The drone slows to a trickle.  Cars pass in the streets.  Life goes on, but with less energy, a plodding sense of inevitability.  A dark cloud of guitar smoke descends upon the city.  This is “Realization.”  Yet in the wake of catastrophe, some fight, some fold and some make art.  Banding together with friends (Nima Aghiani on violin and Babis Coltranis on drum cymbals), Gardelis creates a soundtrack to a world of entropy.  When the violin enters, it seems to provide an elegy, but an elegy is a two-sided marker: the end of one thing, the beginning of another.  Crisis has drawn these artists together; crisis can draw nations and peoples together as well.

Sonically, the album stretches beyond drone, nestling on the outskirts of free jazz and post-rock, its closest relative being Zu’s Jhator.  Its very existence is a metaphor.  At a time when nations are closing borders, genres are opening theirs.  The LP may be called Fragmented Lives, but it comes across as a unified whole.  (Richard Allen)