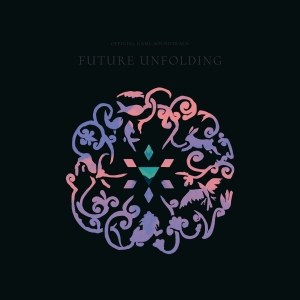 “I am I and my circumstances,” vitalist Spanish thinker José Ortega y Gasset once wrote, “[and] if I do not save them I cannot save myself”. Future Unfolding is an exploration videogame whose soundtrack reflects the ever-shifting positioning of a self within nature, the experience of time not as a linear trajectory but as a tapestry that unfolds, a sentimental cartography that in every variation of life finds a distinct temporality. Composed by Thomas Carleberg and Emil Nilsson, the game’s soundtrack follows this conception closely by means of a contrast between melody and ambience, narrative and background, the individual and the context. Without one, there is no other, and so the chamber instrumentation depends upon the slow and steady build-up of ambient to render its melodies effectively.

For a videogame soundtrack, the running time is quite short at 30 minutes, perhaps because of the game’s focus upon exploratory journeys and revelations, which probably aim at emphasizing the flow between character and environment. The pieces are thus generally short, which might seem counterintuitive when it comes to ambient, but their duration here works as an intensifier, as the split-second experience of an emotion that does not necessarily remains as mood, but that develops differently, depending on the circumstances that follow. Thus, there is no overarching emotional imperative, unfolding as snippets of entire worlds in the making: “The Drop Is a Small Ocean”, with its short, sweet and bright melody, ends not too soon (it lasts 37 seconds!) but maybe too late, its simplicity a myriad suggestion of tones.

Spacier, more somber electronic ambient tracks intertwine with the sweeping, concise directions of the chamber instrumentation, creating a sense of unease that is not negative but its opposite, an uncertainty that soothes and provokes curiosity about what it is that’s coming next. Always short, always to the point, Future Unfolding attempts to grasp the momentary in an act far from one of mastery – it does not really want to keep you fascinated, or set your mood, or make you feel lost in a maze. It wants to ground you, it wants to hold the moment just to save it and then let it go. It deals, in other words, with long-lived instants, with affects that seep into the paths our selves take and which are reflected all around us in every space we like to call ours as well as in those that hold little to no significance. Take a listen to it, live it, and then forget only to live it once again a few cosmic moments later. (David Murrieta)