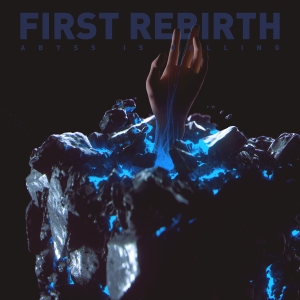 Last year we wrote about a resurgence in instrumental industrial music.  Much of this resurgence has come from unexpected camps, as the grime and electronic fields have nudged their way back to the dark side.  But there are still a few artists recording “pure” industrial dance music, and First Rebirth is one of them.  Abyss Is Calling may not break boundaries (the cover and track titles are typical for the genre), but the music is as solid as anything found on the Tympanik label, reminiscent of classic releases yet clearly contemporary.

The modernity is present in the crisp production values and the blend of influences, from dark ambient to IDM.  The album flows as a single unit, sequenced in such a way as to tell a story.  This is the artist’s story, and it doesn’t have a happy ending, but the struggle bleeds nobility.  Abyss Is Calling is the sound of a hard road traveled, an emotional conflict made into musical metaphor.  Titles such as “Mind Exacerbation” and “Paroxysmal Attacks” sound like something Front Line Assembly may have cooked up back in the day.  Even then, much of the genre’s appeal stemmed from its placement of suffering in a dramatic, sci-fi context.  A relationship’s demise might be likened to the freezing of a soul in a cryogenic chamber, a death in the family to the destruction of a planet.  Programmed beats, swirling textures and occasional samples created an alternate world in which a distraught person might live, gaining strength vicariously through cinematic translation.  First Rebirth honors that tradition, throwing in everything from faux strings (“The Hell Inside”) to a tiny bit of drum ‘n’ bass (“Paroxysmal Attacks”).  The album offers the sense of living in something larger: a dramatic battle between good and evil, which might be a battle within the soul but feels like a battle between replicants and the Tyrell Corporation.

Much of the album is suitable for industrial dance clubs, and we’d love to hear some remixes, perhaps an exchange between artists such as Off Beat’s Remix Wars EPs in the mid-90s.  But the artist is also capable of deep reflection, as demonstrated on “Alchemy of Souls”, creating the contrast that lifts the album past its competition.  Paradoxically, the protagonist of the album seems to have fallen into the abyss by the end, but the artist himself has experienced his first rebirth.  (Richard Allen)