There are many reasons one might start wearing black: to mourn, protest or reflect nihilism; to signify sin, guilt or repentance; to blend in at a art show; to cover one’s depression; to appear slimmer.  To some, the color black symbolizes fear, to others power.  In the Middle Ages, Charlemagne ordered farmers to wear the color; in later times, it was adopted by the aristocracy.  To wear black as a habit is to make a statement, as did Johnny Cash, the original Man in Black, who called the color his “symbol of rebellion – against a stagnant status quo, against our hypocritical houses of God, against people whose minds are closed to others’ ideas.”

To wear black is to feel empowered, a theme visited by Sonae on her follow-up to 2015’s Far Away Is Right Around the Corner.  The title track starts with static and the sound of distant traffic, a double alienation.  Wind chimes rest against a steady click, accompanied by increasing rustles like shovels on cement.  The piece feels black, but reflects different shades, from morose to frightening.  That is, until the clicks explode into a dance track.  Is this the power one feels when armored in the darkest color?  How then to interpret its disappearance in the closing minute? 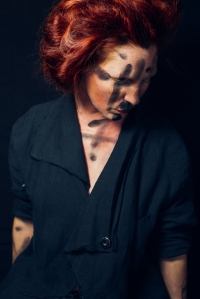 The title “Majority Vote” means something sinister when applied to recent history, and the dark beats of this opening track turn militaristic as they progress.  The morphing fringes are like opposing viewpoints, shut out.  We may be seeing a sea change in female empowerment in the recent #MeToo movement, the flipping of a switch from ignored to heard.  Sonae aligns herself with a strong, no longer silent minority, tired of being discounted in everything from relationships to wages.  The statement she makes is not that she can do things just as well (“Equal pay for equal work!”) but better, opening doors that others have attempted to shut.  The fact that her music is hard to categorize means that she is tied to no genre definition.  As “Rust” deteriorates from a turn signal beginning to an abstract end, it battles expectations of what an electronic track should be.  One imagines club patrons venturing onto the dance floor, their moves dissipating as they try to follow the fading beat.  How does one dance to what is in essence a doorbell?  The somber addition of Gregor Schwellenbach on “Dream Sequence” deepens the dual feeling of personal and communal repentance, the marks on Sonae’s body like an Ash Wednesday gone wrong.  It’s the saddest track, but it’s followed by the sweetest, the chimes of “Soul Eater” like a balm, but the persistent high-toned whistle like tinnitus.

“White Trash Rouge Noir” is Black‘s most aggressive cut, exploding into a metallic beat in a manner that recalls the heyday of industrial music and its representative color.  In the 80s, black symbolized the factory, the working class, the protest against the proletariat.  The music was intentionally cold, hiding a heart too easily broken.  One has the feeling that the same thing is happening here, as hope and despair surface in turn, the music forming a protective shroud.  Sonae writes that “We Are Here” “is for minorities, for the oppressed, who didn’t belong enough.”  Their voice is hers, but it’s never been heard in quite this way.  (Richard Allen)