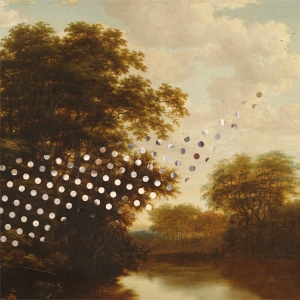 For a while, it seemed that Dortmund’s Philipp Bückle might complete his trilogy early.  The first two entries in the series, Sketches and Drawings, were released in 2015, and were the first recordings under his own name.  But it does take longer to complete a good painting, and Paintings reflects this manner of care.

Elements of the first two albums are present in the new one, although each is a distinct entity.  Tape loops and wobble are the aural hallmarks of Sketches, which also introduces a playfulness with track titles (“Moses Does His Inventory. Twice. In German. All Is There, Thank God!”).  Drawings delves deeper into drone, slipping in hints of hauntology and glitch.  Seasons and weather become common themes.  The titles imitate museum pieces (“Interior of the Oude Kerk During a Sermon”).  Paintings, as expected, is an expansion of ideas, the first track seeming like a response to the textures of “Ships Sailing And Beating Up Against The Wind In The Sound.”  Although the title indicates a palace, the timbre implies an ocean gale.

The new album also offers a fullness of presentation, from Caro Mikalef’s gorgeous cover art to the continuation of themes.  The rain in “Winter Scene In A Suburb Of Copenhagen” is but one example; this is a paint and weather drenched set, the artist gazing out his window, paintbrush in hand.  But there’s also deeper drama, first heard in the electronic approach of “Village Seen Through Trees,” a lurking danger behind the pleasant facade, reflected in the modern dots encroaching on the classic landscape.  The piano and guitar try to restore order, but are unable to stem the tide.  By the album center, the tape wobble returns; all is not as it seems.

But the center of the album also offers a deeper elegance, emerging midway through the coldest track.  “Ships At Anchor, Winter” introduces a desolate cello, which stays to accompany stuttered, wordless female vocals on the subsequent track.  To listen is to emerge from a frigid winter to a still-cold spring.  The singer tries to complete the word “Hallelujah,” but can only reach the second syllable.  A similar effect is produced on “A Seascape. The Coast Of The Island In Evening Light,” with a hopeful chorus wandering from speaker to speaker like sunlight attempting to break through the clouds.  The album grows more “normal” as it progresses, its elements of modern composition nudging their way to the fore, until fireworks explode in the penultimate track.

The final piece, the album’s shortest, re-introduces dissonance, like a hidden scene after the closing credits.  The trilogy seems unresolved until one returns to “Vierzehn,” the opening track of Sketches.  This isn’t an arrow; it’s a closed circle.  The painting is now complete.  (Richard Allen)