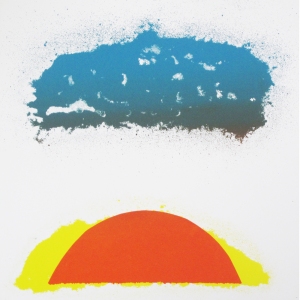 A new label, a new collective and a new name for Copenhagen’s Anders Lauge Meldgaard, formerly known as Frisk Frugt (among others): as the EP title indicates, the composer is Singing The World Into A New And Manifold Time.  The music’s form is experimental ~ eight performers, eight tempi ~ but the tone is pure joy.  Meldgaard is entranced by the concept of newness in all its permutations, as reflected in the Colorform hints of the cover art.  The sun is rising; the cloud is not strong enough to stop it.

The tempo experiment is not immediately apparent, as the album begins with raindrops of notes, seemingly random yet carefully placed.  Each finds its place in the sound field like creatures in the wild, none infringing on the others, together forming a harmonic chorus that sounds less like musicians doing their own thing than musicians doing their own thing together, with respect and playfulness.  Meldgaard himself plays only ewi (an electronic instrument), but his vision is apparent throughout.  Ironically, the only long track is the one that breaks up the action (not that six minutes is long, but the rest are half that length, three as short as a minute): a shower, then another shower, then a long spat of sun.  By “B1,” it’s full frolic.

The approach is courtly, but not restrained.  One can imagine kings and queens walking while their children play in mazes, stomp in puddles, chase dogs around trees.  Such happiness draws attention away from any structure.  And while Meldgaard does impose structure, the ensemble is also given great leeway.  It’s as if he’s saying, “You used to have to stay in the yard.  Now you can run around the whole park.  But you still have to stay in the park.”  The leash is so loose it is hardly noticed.

It’s unusual to find a bonus track on a release so short, but it makes sense given the fact that there are eight participants and one leader, eight tempi and one conductor, and ultimately eight tracks and one bonus.  This final cut is also the title track, reflecting Meldgaard himself, the master behind the invisible baton.  Admire the construction, but stay for the sound.  (Richard Allen)