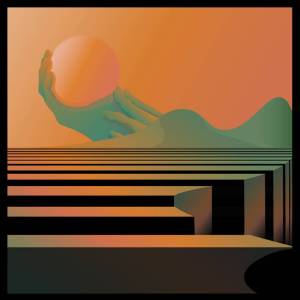 The name may be only vaguely familiar but there is a good chance you will have an album (or at least a song) in your collection on which Laurence Pike plays. His regular gig as one-third of PVT (previously Pivot) alongside his brother Richard and Dave Miller is supplemented by also being a member of Triosk, Roam The Hello Clouds and most recently Szun Waves with Luke Abbott. He’s also contributed to albums by a bunch of other artists from Scott Herren to Burnt Friedmann and it’s clear the years of playing and recording drums in the studio has not been wasted when working on his own album.

The basic scenario is this: Laurence Pike arrives at the studio – I would imagine at a business-like 9 or 10am – and leaves later that same day with Distant Early Warning tucked under his arm. Now, the whole ‘record in a day’ process is nothing new – it used to be pretty standard (cf the first Beatles LP) – but it does bring its own levels of pressure, especially to an improvising solo musician. The kit has got to be mic’d up perfectly from the start, the engineer has got to be sympathetic to the process and most importantly, the muse has to visit. So, experience and talent are both pre-recquisites.

With this disciplined approach – and frankly you should expect nothing less from a drummer – Pike has crafted an album that feels incredibly fresh, as if the ink has only just dried. Which is a bit of a mixed metaphor but you get the idea. This is certainly down to the free flowing approach that Pike has adopted, relying on the intuition borne from years of honing his instrument craft and the willingness to go into a studio and see what happens. I’m sure he had some idea of what he was going to do but it feels like he planned to not plan and just see where the drums led him, which had the potential for disaster.

Instead it’s a drum-centric masterpiece, in which the percussion is solely garnished with samples of Pike’s own playing. The sampler does quite a lot of heavy lifting, though, with drones, pianos and organ sounds embellishing the beats. Given the time frame involved, I can easily imagine an over-heated sampler emitting smoke by the end of the session and falling to bits in the same manner as a clown car. It is the combination of player, instrument and technology that makes Distant Early Warning so impressive.

If, at this stage, you are still wary of a solo album by a drummer, and are anticipating a load of, well, drums then the opener “Life Hacks” won’t do anything to dissuade you. Pike seems to utilise every drum and cymbal in his kit, rolling round the toms, and deftly shuffling the hi-hat from time to time. However he’s not a pushy, moment-in-the-spotlight player and his playing is delicate enough to provide the background to the melodies generated through the sampler. Pike’s playing feels relaxed, unforced; yes, there’s quite a lot going on but there comes a point, fairly early on, that it doesn’t feel like it’s all about the kit; by “Hard Feelings”, when the drums drop out almost completely, you will starting wondering where they’ve gone.

Indeed, there are albums that depend far more on the beat than Distant Early Warning (think of every instrumental hip hop album, for example); what Pike shows is that the drums don’t have to sit at the back all the time and neither to they have to come fully to the fore for the dreaded drum solo. The closest recent comparison is King Crimson’s live line-up with three intuitive and complementary drummers who embellish their (group) solos in a similar way to Laurence Pike on his own. A mixture of tuned percussion, a willingness to embrace technology and a lot of talent have gone into making this record. It’s a bold release; on paper it shouldn’t work but in actuality it’s a triumph. (Jeremy Bye)