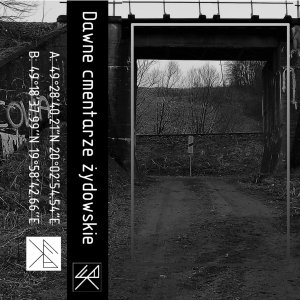 Last year, Szara Reneta recorded what would turn out to be the first installment of the culturally significant Dawne Cmentarze Żydowskie/Old Jewish Cemeteries.  The second tape has just been released, and underlines the importance of sound, history and place.

To read about the history of these locations is to be heartbroken.  Before World War II, nearly 9% of Poland was Jewish.  The Holocaust changed all that.  Back home, cemeteries marked the loss of loved ones, even though their bodies were elsewhere.  Then Gentile construction workers cannibalized the tombstones.  Maciej Wirmański writes, “These days, most of the 1300 Jewish cemeteries in Poland look like nothing but fields full of bushes, high grass or trees with a few remaining tombstones.  But there is no one to take care of these places, and few people know where the cemeteries are.” As the drones give way to the sound of birds and cars in “Dawny cmentarz żydowski w Nowym Targu,” one recalls the lamentation, “Is it nothing to you, all you who pass by?”  To forget history is a second death, an erasing, an atrocity.  But Dawne Cmentarze Żydowskie is a gift, inspired by the groundbreaking work of Boleslaw Wawrzyn.

Someone is listening.  Someone is noticing.  Someone is spending the time to mourn, to honor, to contemplate, to make art out of dust.  This is what Yahweh did when breathing life into Adam.  The artist’s witness is not silent; in fact, as “Dawny cmentarz żydowski w Nowym Targu” returns to its beginning, it’s downright loud, an essential alarm.  The second piece begins with the clatter of a passing train, normally a benign sound but in this case frightening by association.  In contrast, the footsteps are friendly: those of the cemetery’s only visitor.  The artist finds raw material with which to make music, imitating the sounds of the shofar, tof and paamon by using pipes and other objects.  A nearby stream implies the passage of time.  Nearly fifteen minutes into the piece, the buzz returns, growing in volume until it has drowned out all in its wake, like the eradication of a people.

A year later, the artist feels compelled to continue his journey, his labor of love.  This time he visits the nearby village of Czarny Dunajec, where once a cemetery and synagogue stood.  The first was destroyed, the second converted to a warehouse.  Larches and basswoods dominate the sonic field; at times it seems as fertile as a rainforest, despite its arid past.  Again history seems buried, not only literally but figuratively.  The sounds of water can be heard, at times a trickle and at times a torrent.  One recalls the words of the prophet Amos, “Let justice roll down like waters, and righteousness like an everflowing stream” (5:24).  Szara Reneta does justice to these cemeteries by restoring the dignity of their dead, honoring ancestors whose names ~ in fact, whose very existence ~ might otherwise have been forgotten.  This is a holy task, once the work of Tobit.

But the artist does more than record; he also reflects through guitar, drone and feedback.  By layering new sounds on top of the old, he creates another level of meaning.  While history may seem static, new interpretations can attach tendons to bone, skin to tendons, breath to skin.  Humans may forget; Szara Reneta opens a door to the eternal.

On the second side, the artist visits the Podwilk cemetery, which possesses an unusual sonic quality: although the cemetery has been restored, the birds avoid the place.  Those heard in the background are keeping their distance.  This is a quiet piece, presented in two parts, the first straightforward and the second manipulated.  As the recordings are chopped up, looped and re-presented, one marvels at the passing of the artistic baton.  Dawne Cmentarze Żydowskie is a work of reclamation and proclamation.  The process of creation, begun in the first chapter of the Torah, continues here.  (Richard Allen)