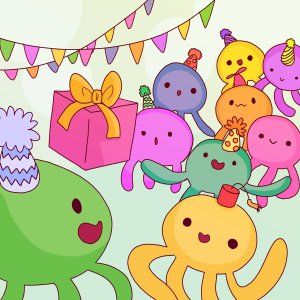 What music do you get when you’re a cute cartoon octopus and you get together will all your friends to play some races and celebrate your birthday? Muddledash! is brimming with the joy of friendship, a sweet, pop album of electronic music made for the game of the same name, in a coherently eclectic style of the kind you’d only get in videogames. As such, it accommodates the upbeat of house in the same breath as it does the nu-disco Latinisms of the likes of Todd Terje, laying the ground for a wide variety of rhythms constantly pushed by bubbly melodies made truly from the happiness of sharing moments together. One of my favorite aspects of this OST, however, is that it doesn’t aim for that simplistic sound-image of cartoon happy, sprinkling its dreamy hyperactivity with a production that softens out the oft-intense bodily imperatives of dance music. There’s room here to rest, those moments in which you and your friends huddle around mostly in enjoyment of each other’s presences.

This is the journey from the excitedly named “DASH!!!!!!!!” (yes, that’s 8 exclamation marks) and its catchy, celebratory melody, through the mambo sequence at the beginning of “How Did Nobody Else Bring a Gift?” and the nice, serene pop of tracks like “Slidesurf” or the uplifting Gui Boratto-like electro of “A Birthday Party Spent With Almost All Your Friends”. They’re all decidedly joyful affairs, but they’re also patiently laid out, in the sense that even when the average duration of tracks is two to three minutes, rj lake made sure to develop a theme fully for each. This means that one of contemporary videogame OSTs’ common problems regarding the ‘background’ nature of some tracks is altogether absent here, being closer to the OSTs of tighter, more focused games that operated with older technology. In other words, every track is self-contained, and the soundtrack is very rich because of it.

As an album, Muddledash! is playfully divided into two by means of a track called “~flip tape over~” and an unexpected hip-hop bit inserted in a Sonic the Hedgehog-like poppy tune, entitled “Squidmaster P and Argyle the Warmhearted Rage Against the Construct of Linear Time (Tentacles Forever)”. The first half is much more melodically oriented and subjected to a lot of individual details in the mix: conversations taking place, games mediating interactions, a lot of gestures and proximity, the noisiest parts of a gathering of friends. After the flip, the tracks are less detailed, gaining an ambient element instead: the talk slows down, interactions are low-key and driven by warmth and the settling down of everyone’s places. It’s like the jazzy sequence in “Garageaquarium”, a drum n’ bass track with AFX drums that revels, to put it quite simply, in chill.

If you’ve been aching for a happy game OST that’s more than just a collection of “happy” tunes, Muddledash! will fit your needs rightly. It’s a thoroughly enjoyable dash (!!!!!!!!) of eclecticism, of the kind that game OSTs do better than any other kind of music out there. (David Murrieta Flores)