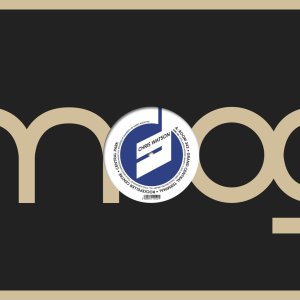 The cover and series name shout “Moog!”  Yet the sound is what we’ve come to expect from Chris Watson: field recordings treated with love.  The fact that the chapters were filtered through the Moog Sound Lab’s System 55 seems incidental, but widens the understanding of the processing tool.  This 12″ is part of a new series that also includes entries from Hieroglyphic Being, Charlemagne Palestine, Mika Vainio, Gazelle Twin and The Grid, a remarkably diverse group ~ our only quibble being the consistent, yet unrevealing cover art.

Watson’s set concentrates on New York City, and offers a sonic window into the experience of visitors.  “Grand Central Terminal” offers the hum of human traffic, along with gentle specific reminders: the announcement of a train, the departure from the platform, a child’s voice.  A clear contrast is made by “Rockefeller Centre” (using the British spelling) as the hum disappears but the other sources remain.  This time the journey of the train claims the ear, including the distinctive two-note warning tone, somehow devoid of the ubiquitous warning, “Watch the closing doors.”  The sound of running children in “Central Park” is particularly endearing, as is a hint of birdsong, although less than one might expect considering the location.  Still, those who have visited New York without living there are likely to be able to relate to the dominant soundscape of traffic and transit; they have not yet discovered the city’s hidden places.  The intrusion of airplanes, sirens, and fire horns makes a good case for the city as the antithesis of Olympic National Park.  Abandon all hope, those who seek one square inch of silence.

Watson makes an interesting sequencing choice with “Times Square,” as the earlier pieces progress from south to north.  Times Square is actually south of Rockefeller Center.  But as the loudest of the tracks (by virtue of conversation, honking, bicycle bells, passing bass, cries of “Taxi!” and more), the sequencing makes sense. Just as one seems to have escaped to relative peace, the real world rushes in with a vengeance.  Some grow acclimated to such sounds, but the noise levels remain at dangerous levels throughout most of the day.  This makes “Jamaica Bay to Leigh Valley” seem a welcome escape.  The sirens can still be heard in the distance, but the waterfowl drown them out.  The finale serves as a litmus test for the ears: if one were forced to choose between extremes, which would one prefer? (Richard Allen)