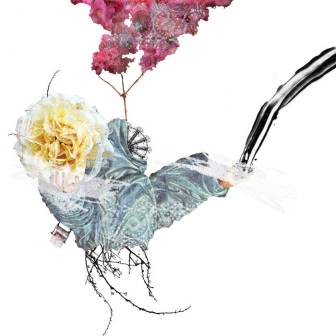 Version & Delineation‘s pale melodies are accompanied by trembling chords. Lovingly unedited background sounds add to the everyday atmosphere: the flow of air, the creak of a chair, and a voice carried on a cool draught.

Like a fine autumn mist, the swooning ambient layers drape themselves over a gentle piano.

This quiet release is a powerful one. The first collaboration between Caught In The Wake Forever and glacis is alive with understated beauty. The piano improvisations were recorded straight to cell phone, giving both immediacy and authenticity to the transient sound of brushed keys and those accidental sounds which blossom and fade within the piano’s surrounding environment. The background sounds act as quiet field recordings, too. Thanks to its unconventional recording method, the music feels snug and informal, and the modest, creaking piano poetically fits the medium on which it was recorded. Nothing else is required.

Technology is not always a necessary tool, but the metal rectangle that so entrances the general population has increased the emotional density of the piano. It adds to the timbre and the fragile delicacy of its tone…as well as documenting the sound of the everyday, and the eloping of the seconds.

The special moments are those which are often forgotten in the general stresses of the day.

This, though, is a chance to pause and remember. And to be thankful for each breath. In short, it’s domestic music.

Caught In The Wake Forever adds to the piano with a series of sandpaper-sketched textures, glitches, and a lightly-disordered electronic style of syntax.  When paired with the piano, the two form a marriage built on equality and trust. Tasteful and elegant in the way they’re inserted into the music, the electronics nestle within, cuddling up to the piano. It’s hard to maintain subtlety and consistency throughout a record’s running time, especially when combining differing sound sources and differing artistic minds, but the listener won’t find any reported problems here. (James Catchpole)