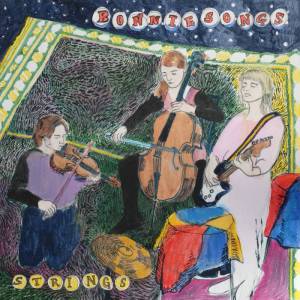 A single string can be a fragile thing, but together they can be mighty. A spider can get around with one gossamer thread but it won’t catch much, yet if it combines its lines into a web some unsuspecting fly will no doubt provide lunch. We won’t dwell on this area too much lest we upset some arachnophobes but it is perhaps no coincidence that the second section of Bonniesongs’ three-part Suite which takes up most of Strings is named after our eight-legged friend. Although the line ‘Spider, don’t you catch me’ suggests that Bonnie Stewart is aligning herself with the fly – and as she finds herself amidst a wild array of strings that is understandable.

The chaotic whirl of “Spider” is the most intense moment here, threatening repeatedly to collapse in on itself before somehow resolving into the relatively more gentle “Goodbye”. The three-part Suite varies between the composed and the improvised; I can imagine Stewart advising the string players (Freya Schack-Arnott on cello, Sacha Bota on viola) to ‘just go for it’ on the most free-sounding parts of “Spider”, with Stewart herself adding some unexpected percussive hits for good measure.

However the off-kilter diversion of “Spider” does not stand on its own – this opening Suite groups its three parts into one track so one can appreciate the build from “Push And Pull” through to the calming finale. The cello and viola still threaten to fly off in all directions but they are definitely more restrained elsewhere, adding a sympathetic wash to Stewart’s quiet, understated vocals and steady guitar. Strings benefits from this mixture of Bonnie Stewart’s songs, which she has presumably been playing live around the Sydney folk scene for a while, and the willingness to let go and see what happens – stemming from Hohup, the Korean concept of breath and movement, which the players studied before recording.

The second track on the EP is a sort-of flipside to the twenty-minute Suite; “Follow Me” has a more restrained string accompaniment and it places the vocals and guitar to the fore – it’s catchy too, and understandably the easiest way into Bonniesongs which is why they’ve made a video for it. If it works (and there’s no reason why a bunch of Julia Holter fans shouldn’t flock towards “Follow Me”), then there is a whole world to be discovered in the rest of Strings. It’s no coincidence that the words ‘string’ and ‘strength’ share the same root – there’s some powerful music here. (Jeremy Bye)