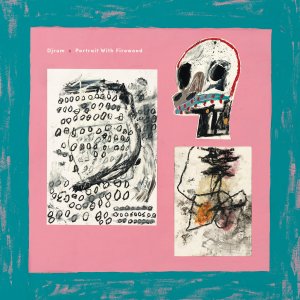 The portents for Portrait With Firewood are unusual to say the least, particularly for a producer more associated with a series of releases that mostly combined cinematic samples and atmosphere with a dubstep-inspired late-night wooziness. Instead, Felix Manuel, who records as Djrum has put the folder of movie quotes to one side and returned to his first instrument, the piano. He’s also picked out a couple of influences not normally associated with his usual style – Alice Coltrane (with whom I assume you are familiar) and performance artist Marina Abramovic, who is probably best known for her 2010 work The Artist Is Present held during her Museum of Modern Art retrospective.

If Manuel’s playing has been inspired by Coltrane and Keith Jarrett, it’s the work of Abramovic who has had a greater influence over the mood of the album – watching her videos or reading about her work was enough to move Manuel to tears during an emotionally turbulent 2017. He has stated that he wanted to create something ‘overwhelmingly beautiful’ and capture the ‘inherent melancholy in beauty’ within Portrait With Firewood. This is laudably ambitious but melancholia is not the most obvious response when listening to “Sex” which clatters along at a brisk and juddering tempo. And yet… about midway through “Sex” there’s a change a breakdown and the introduction of a piano along with Lola Empire’s voice and Zosia Jagodzinska’s cello. Suddenly, a track that is steady but nothing spectacular has a whole new dimension to it. The elements that were present in the first half remain, but tempered with the extra instrumentation, they become less forceful, and more generous in spirit. “Sex” could indeed leave you crying on the dancefloor.

There are numerous instances of this juxtaposition occurring in Manuel’s production – even “Creature, pt. 2”, a track which ends up ticking most of Djrum’s usual style boxes, places a cello in the mix to give greater texture and emotional resonance. There’s always been this more thoughtful side appearing on Djrum’s releases, from the first EP Mountains onward but it has rarely felt as cohesive as on Portrait With Firewood which opens and closes softly with the heavier tracks in the middle to form a distinct narrative arc.

The piano based tracks that usher in the album set out the mood in an affectingly direct  manner; “Water Rising” incorporates many elements of drum ‘n’ bass but withholds the release of the drums, “Creature, pt.1” could easily sit on an Erased Tapes compilation. By way of contrast, there’s a real feeling of euphoria near the end of “Showreel, pt.3” when the beats burst forth in a scarcely controlled helter-skelter of snares. Portrait With Firewood is an album that aimed high if we can judge anything from the named influences – it doesn’t quite reach the intended levels of inherent melancholy in its grooves, but still packs an emotional punch. (Jeremy Bye)