Tim Shiel ~ Glowing Pains: Music from The Gardens Between / Interview 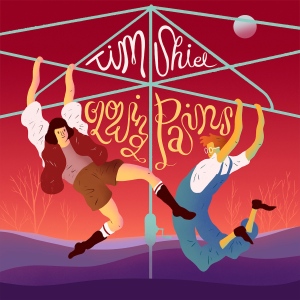 There’s a tension to reconcile when crafting a videogame soundtrack that plays on the mind of Tim Shiel. ‘Normal’ music has a defined path – a start, middle and end – but videogame music is very much nonlinear, dictated or at least guided by the actions of the player. In acknowledging this tension, the Australian producer and radio DJ has created one of the most captivating videogame scores of 2018, based on the recently launched indie game The Gardens Between, about friendship, memories and time manipulation. But his official soundtrack – Glowing Pains: Music from The Gardens Between – offers much music that isn’t even in the game, and vice versa.

I had the pleasure of talking with Tim recently about his involvement in the soundtrack, and how he came to produce more than one version of it.

‘To some extent on a fundamental level the conventional methods of listening to music can never convey the nonlinear experience of in-game music. There are elements of the experience of that music that bounce off the interactions you make when you play the game. For a lot of music in The Gardens Between, it doesn’t feel like there’s a canonical, linear version of that song that I can plonk on a soundtrack… It’s always going to be some different version of what the experience of hearing that music in the game is.’

‘It’s so important that the aesthetic really be nailed’

Rewinding four years (pun intended), Tim came to be responsible for the game’s music after meeting one of its developers at an award ceremony in Melbourne. The producer had recently soundtracked a mobile game called Duet that had caught the developer’s ear. That aside, Tim has a number of records to his name but little in the way of prior videogame soundtracking. Duet: Original Score is pulse-driven electronica that ramps up the tension as players navigate through increasingly challenging obstacles. The Gardens Between seems antithetical – a meditative array of otherworldly islands festooned with oversized real-world objects, on which players manipulate the flow of time to help two children reach each peak. Given this difference, why the interest in what Tim could bring to the project?

‘A bunch of the team at The Voxel Agents, who worked on this game, have really deep music taste – and I think they looked up my radio playlists and some of my other projects and started to get a sense of what I do beyond just making music. The style of game that this is, it’s so important that the aesthetic really be nailed and for it to just feel right emotionally – that’s at the core of what makes the game successful. I think they wanted someone who has good taste as much as good skills!’

Indeed, Tim describes his music as ‘emotional trajectories of sound’ – an apt phrase for the projections of warmth and light that radiate from Glowing Pains at all angles. As crisp piano notes creep furtively into view on short opening track “Spirit Home”, soft synth tones arrive to swaddle them as though protecting from harm. The piano is

escorted from stage as we segue seamlessly into “Where Will We Go”. Here rhythmic chords glitch on repeat, sounding trapped between two frames of animation – or two planes of existence. The titular question repeats via a female vocal, then disappears. This more patchwork track sees sounds and textures fade in and out, as though one of the game’s playful islands is being constructed (and deconstructed) before our eyes.

Time and space are key themes that conjoin game and soundtrack, the latter playing a significant role in many of the pieces. “Calm Before” is a gossamer-thin veil of drone, before which scratches, pops and theremin-esque squeals flit like a disturbed school of fish. In time a guitar chord sequence emerges, warm yet murky, as though guiding us into the water. It too swims off beyond our reach, leaving an array of otherworldly sounds that briefly disorientate.

These patchwork compositions are, in fact, exactly that. As development on the game stretched on, the team grew impatient for some creative catharsis – and promotional buzz. They decided to create what Tim calls ‘long ambient trailers’ to showcase the game’s graphical and aural style. Each of the three 15-minute trailers features footage from the game’s playful islands, frozen and immersive, backed by extended versions of musical themes from the game. To assist and inspire him, Tim reached out to some friends – and the response almost overwhelmed him.

‘I had these three pieces that were three or four minutes long and I just sent them to a tonne of mates – some producers, some electronic, some instrumentalists, some singers. I guess over the years I’ve just gravitated toward people who are kinda… up for it? I ended up with 17 different parts sent back, which I started frankensteining together [to create] these monstrosities! It became this really fun jigsaw puzzle for me to put together, and I ended up with three 15-minutes songs, which then have been segmented into different bits. That’s what the OST is, with a bit of development.

So there’s a ton of music in the game that’s not on the soundtrack, so I’ve still got to figure out how I’m gonna get some of that stuff out!’

It’s not uncommon in the videogame soundtrack space to repurpose much of the in-game music to suit a condensed, isolated listening experience; Glowing Pains stands out by instead featuring extended versions of in-game music – and with entirely new sections incorporated. Among the 17 collaborators who submitted them are Eli Crews (worked on Colin Stetson’s Sorrow) and fellow Australians Leah Kardos and an ACL regular.

‘A lot of those sounds are from Luke Howard, who’s the primary musical collaborator. And a lot of those come from literally a 15-minute improvised recording that Luke sent me early in the process. That one sound from Luke ended up eating itself over and over again, and ends up appearing in so many different layers and parts of the game.’

Manipulations of Luke’s piano are stitched into no fewer than eight of the 12 compositions. The ivories are heard in their barest glory in the closing pair of “Spirit Duet” and “Between Ends”, whose sombre chord progression provides a quiet emotional crescendo, before transitioning into the same sequence that starts the record. Time flowing both forwards and backwards.

The other 16 additions – whether a vocal sample, an upright bass against the tweet of birds (“Golden Satin”) or a sumptuous horn melody (“The Storm”) – are isolated occurrences. They imbue Glowing Pains, which Tim calls ‘a collection of ambient posse cuts’, with variety, charm and the element of surprise, even while it remains dulcet and quietly magical till its close. “Are You The Same” shines with these elements, as pretty synth arpeggios are supported by prominent vocals from US producer, re/search/er. But it’s over in mere minutes, segueing into the wordless “Weight of Air”. That track’s close is a languid passage of chords laden with mere air yet somehow weighing heavily on the heart – a moment of pure emotional resonance in a record centred around the fantastical and the surreal.

‘We wanted the game to have this proper emotional core’

Given Tim got involved so early in development, much of the game’s identity – including the two child characters and the themes of memories and friendship – had yet to be decided. So what was his main inspiration – the fundamental building block for the score?

‘Right from the start the game had an otherworldliness, and there was always this sense that these children were going to be involved in some way… There’s a lot of drone sounds, a lot of sounds that have been manipulated to feel frozen in time, to reflect some of the ideas of the game… It was about finding the combination of organic, frozen sounds and textures and ambiences. And once I found them I started reusing them constantly. It’s a cheat’s way really to get that consistent aesthetic, to simply take parts and reshape them. For a lot of people that’s a subconscious thing… I might have taken a guitar chord and reversed it, re-pitched it and re-timed it, so you would never put the two together – but there is something tonally in the waters that ties them.’

As the game found its identity, Tim had to ensure that all the sound – music, in-game effects and mechanics-based ambiences – were interwoven artfully. He and the developers brainstormed audio implementation ideas, deciding to incorporate real-world sounds and figuring out how sound would behave when the player moves the characters backwards and forwards in time, for example. The aim was to create a consistent and believable aural aesthetic.

Having those real-world sounds in there felt important right from the start, because there’s surrealism involved in the game’s visual presentation and even in the very concept of what the game is. It’s like a dreamlike experience that these kids are having, but at the same time we wanted the game to have this proper emotional core – and you can’t necessarily get to that unless it kinda feels real… The islands feel like fragmented memories, and to mirror that with the music and the ambience was an interesting challenge.’

‘You almost have to develop your own platform’

Emotionally inspired and resonant though his work – and Glowing Pains in particular – may be, Tim certainly doesn’t ignore the technical aspects. He is keen to expand his still-limited experience of videogame scoring and seeks more opportunities to get involved early on in development, when audio implementation is still a blank canvas.

Then, once development is done, there’s always that tension still waiting to be reconciled.

‘If game composers want to be more creative in terms of reflecting that [in-game music] experience as a pure music listening experience, you almost have to develop your own platform that can cater to some sort of nonlinear experience of music, whether it’s an app or something – which I’ve flirted with in the past! But at the same time, most people who listen to music go to a handful of places to do that… I want to make sure my music is there for anyone who wants to hear it!’ (Chris Redfearn-Murray)

Many thanks to Tim Shiel for giving so much of his time. Quote extracts have been edited for brevity.