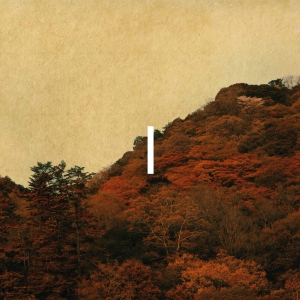 IIKKI Books returns this fall with the colorful explosion of Pequeñas Melodías, a book of full-color photographs by Albarrán Cabrera (Angel Albarrán & Anna Cabrera) and an album from Federico Durand.  The pieces of this release complement each other and can be purchased separately or as a set, with both vinyl and CD options available.

The cover speaks of fall in russet and copper tones, sky the color of sand, as if the blue had been leached by the changing season.  While other autumnal images await inside, Albarrán Cabrera tackles the brighter seasons as well, with floral and aerial photographs springing into primary hues.  As many of their works are privately owned, the book operates as a private gallery.

Federico Durand’s music is a perfect accompaniment.  The gentle tones of the Argentinian composer are well-suited to nature and nostalgia.  Music boxes and tape loops create a soft glow, like flickering candles.  Acoustic guitar and piano ground the project in earthen tones.  Notes fall like leaves on soft soil.  The early, shorter tracks might play on endless loop and be just as effective; “El Jardin de Roses Antiguas” in particular possesses a soft, subtle grace.  As the bell tones of “Las Estrellas Giran En El Pinar” twinkle and tumble, one imagines stars, both in the sky and in nursery mobiles.  After a swift stop at Google Translate, one smiles to learn that the title is translated “The Stars Rotate in the Pine Forest.”  The album title, roughly translated “Little Tunes,” is lovely as well.

Not all of the tunes are tiny.  In the center of the album, Durand experiments with longer pieces that distort the passage of time.  “Canción Del Reloj Cucú (Song of the Cuckoo Clock) restores the temporal image, which is then extended by “La Tarde Ronda Por La Casa (“Afternoon Round the House”).  Even while time drifts, clocks and planets continue to move.  While we live in suspension, everything ~ even a tape loop ~ must eventually wind down.  The gradual shift to autumn seeps in at the periphery, and finally reaches a point of astonishment: we’ve changed ever so slowly, only to find a different form of beauty.  Through music and image, IIKKI Books has opened a window to allow the autumn in.  (Richard Allen)