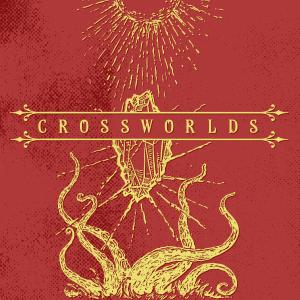 The album was already a blast ~ a dramatic orchestral rock project featuring underwater field recordings from Newfoundland and a generous array of newly created instruments.  But then they went ahead and added a hardback book, pumpkin colored, gold gilded and perfect for the scary season.  Crossworlds is a tale of a giant tentacled beast menacing the residents of a small island, and the elderly lighthouse keeper who stands in its way.  Some may be reminded of Plinth’s Music for Smalls Lighthouse, another suspense-filled project that includes a literary component; HP Lovecraft’s Chthulu; or the golden age of pulp fantasy.  The novella ~ written by Jordan Crute, based on a story by Crute and Joshua Van Tassel ~ also has a science fiction angle, and can be enjoyed as an allegory as well as a late night tale.  The album by Van Tassel is purposely meant to score the novella, its 39 minutes a perfect length for the 39 pages, allowing the possibility of a concurrent experience.  A library card and bookmark are included as charming bonuses.

Van Tassel starts the suspense early, with chimes and Therevox (imitating the sound of a theremin, suggesting old black-and-white movies).  Deep drones swirl like the uncharted depths.  The orchestra rushes in like a crashing wave, a harbinger of doom.  Do we really want to know what happens next?  Of course we do.  Then as in any good horror film, the music turns pleasant, even pastoral, offering a bucolic tint to gain our sympathy before the tide of destruction.  (Our favorite image: a lighthouse lens, “like a lopsided crystal muffin”).  There’s something worth fighting for in this seaside village: a people, a way of life, a dedication to offset the ancient evil.  The first attack is signaled by the swift drums and rising volume, much less scary in the music than on the page, preserving a sense of hope.  When the music softens, the main theme surges, solidifying the soundtrack status.

Will one think of giant squids and magic crystals every time one hears the music?  It’s possible ~ the continued challenge of a project that features such strong images.  But it’s more likely one will think of courage, foolhardy or otherwise: that of the villagers who want to fight, or the lighthouse keeper who pushes through mourning to responsibility, and later (no spoilers!) from tenderness to violence.  This is music of nobility, signaling its faith that goodness will endure, even at great cost.  And while not every component will be understood – the ancient tales remain untranslated, open to sequels – the character of humanity is underlined through trumpet and snare.  The main motif of legacy is closed-ended and dependable, five notes followed by six and then seven, the fifth note uplifted in each repetition.  As some may recall from “Monkey Gone to Heaven,” man is five.

Some of these instruments sound like a lot of fun, especially “cutlery, instrument cases and chairs.”  Despite the subject matter, Van Tassel and friends seem to have smiles on their faces the entire time.  The track “A Turning Tide” begins in mystery but ends in ebullience, a perfect reflection of a happy Halloween: a nervous walk into darkness, a triumphant return with candy loot.  While one can’t eat this project, it feels like a bulging bag of sweets.  In a literal and literary sense, this is a library book you can keep.  (Richard Allen)