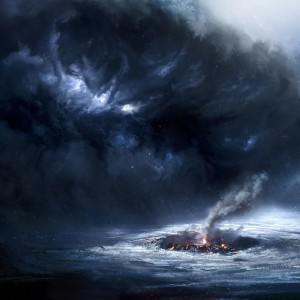 The power of Frostpunk, by Piotr Musiał, resides in the able mix of late-romantic and modernist styles, reflecting, in a way, the game’s portrayal of the irruption of catastrophic natural disaster upon what was supposed to be an implacable history of progress. A sad, passionate main theme pervades the entire album, transforming in Wagnerian manners into the core of both dramatic and anti-dramatic set pieces, the earlier a humanist intensity that evokes tragedy, the latter an anti-humanism that emphasizes the sheer horror of what we’ve done to each other in the name of life.

Set in 1886, the game bleakly explores the social relations produced by the Industrial Revolution by means of a fantastic apocalyptic event that plunges the world into eternal frost, testing the extremes of the ideals of historical progress that remain even today, and which underlie the precarious existence of a majority of people in a planet soon to be wrecked by the processes it detonated. Musiał provides a romantic accompaniment to this tale, centering on the sublime struggle against a fate that will not cede, an environment in which the artwork of the future has become a corpse half-frozen. The string melodies sway with woe and loneliness, their role in the soundtrack both a gateway to traditional heartbreak and a hint towards a harshness that exceeds, but does not center, the human. About 25 minutes in, the centrality of the melody gives way to more ambient renditions of string sounds, the winter wind echoing throughout iron structures previously thought as impervious to any and all natural effects: a symbol of victory turned into a symbol of despair.

Many composers that lived through WWI pulled back on their previous avant-gardism because they came to think that its framework of thought had been the same that produced the unspeakable calamity of the war; the ways in which Musiał introduces modernist techniques and sounds into a primarily romantic form of composition turns the soundtrack into a powerful fantasy of abjection in which the sudden stop of what was supposed to be the onward march of history reveals what many a romantic knew all along: humanity’s enlightened path leads nowhere. This is why the soundtrack works so well in that regard, complementing the dramatism of the melodies with the estrangement of non-melodic resources, unsatisfied with simply making listeners feel sad – it wants you to feel cold, the freezing hurt of putting the lives of some over the lives of others, the stillness at the bottom of a society with no more coal to burn. And it succeeds, turning what is essentially a management game into a moving, engaging artwork. (David Murrieta Flores)