Art Sqool is sort of an absurdity device, pushing silly technocratic questions like “can AI replace a human art professor?” by means of simple MS Paint exercises until their fundamental misguidedness is revealed. The music that this reductivity exposed reflects is an interesting mix of ambient, soothing drones, and straightforward synth melodies; the nonsensical nature of the game’s world crashes and bounces between the clear-cut minimalism of its cartoon shapes and the TV static noise of the backgrounds, your “teacher” giving you seemingly simple but surreal, contradictory tasks (“draw something that’s not going to impress anyone” – how would you know?). There’s no way to pin down exactly what creativity is (or what art is, for that matter), so it is only fitting that the OST snugly accommodates in the ambiguous space of things that sound like music but that it would sometimes be hard to define as such in traditional terms. The titular first track introduces us to the synthesized voice of the main character, a ridiculous little cartoon song with an upbeat tone that leads straight into the contemplative diffusion of “C.L.O.U.D.S”, with somber background drones and ambient that refuses to coalesce into something definite. The opaque electronics of “Ice Sculpture”, with its low-key disturbing intensity, or the relatively rambling “Blowout”, in which a melody begins but never goes anywhere, represent well the spirit of a soundtrack and a game that reject confinement, finding in the heterogeneous clash of all its elements the true clarity that only the contradictions of the imagination can provide. So no, an AI cannot replace a human art professor because do not need a professor to begin with.

The Window Box had me engaged from the very first track – a turn-of-the-century piano-led ensemble piece with distorted synths (that sound like a vibraphone) and a simple progression that gives the track a staying power that made me yearn for more. The ensuing pieces follow an expertly arranged flow between cool jazz and chamber music, its overall serenity pinpointed by small dissonances that in classical terms hint at unresolved tensions, unconscious disruptions of a center that will not hold. The game, a visual novel about a group of women trapped in a house, forced to confront their inner and outer demons, presents us with an equally classical (even Victorian) theme of femininity restricted, of the sinister undercurrents of the spaces of domesticity in which silence seeps and creeps beneath every social mask. With a somber twist about half-way through, the soundtrack turns melancholic, the happy melody that powered the first track coming to be reinterpreted as a sad, equally striking motif. Nothing is the same after the masks fall off, in the sense that the last few tracks sway with moving little piano melodies that have resolved the tensions of the past in favor of the acceptance of an underlying, grounding, vital sadness. The waltz in “Storybook”, the penultimate track, is not the romance of victory and conquest; the depth that the jazz contrabass grants the composition turns its romantic undertones towards the sweetness of tears, a bliss earned in the admission that something has always been broken, that dissonant dream being life itself. 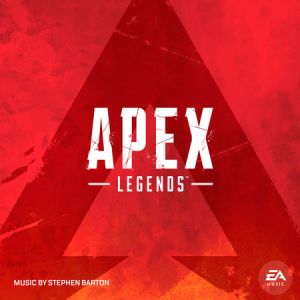 Tense strings, uneasy fanfares, and a very precise use of electronics are Apex Legends’ main tools to build a soundtrack that jumps from tranquility to frantic action within very short timeframes. The main theme, a simple and short electronic melody, is a leit motif that marks the ambiguous place of the heroes of the game, the legends forged in repetition, a cycle of death and sacrifice whose source is the legendary Battle Royale. Peppered across all tracks in one way or another, the motif is encircled by different emotional registers depending on where the player’s at: introduction, preparation (the menu), choosing a character to play with, dropping from a high-altitude airship into a carnage that involves 60 competitors at a time, and finally the victory screen. The intro blasts the motif with background percussions reminiscent of Queen’s “We Will Rock You” and dissonant strings that emphasize the excitement and the anticipation of participating in this deadly myth, focusing less on the idealization of its violence and more on the reaction from the ground. Preparation and choice both pull back on the bodily energy and let the tension simmer, using the motif as a base for reflexivity that culminates in what is the soundtrack’s strongest piece, “You Are the Jumpmaster”. Its starting fanfare is not one of victory, it is one of tragedy – facing impossible odds and resisting an implacable fate. The tranquility it leads to is exploited by the latter part of the track with an expressive blast of brass and making the motif central to a dissonance that cannot be resolved, whatever happens. Even the victory piece moves upward for less than a minute, turning into an ambient piece that conveys relief more than satisfaction in having won. Apex Legends is short, but Barton turned that into the OST’s greatest strength. (David Murrieta Flores)