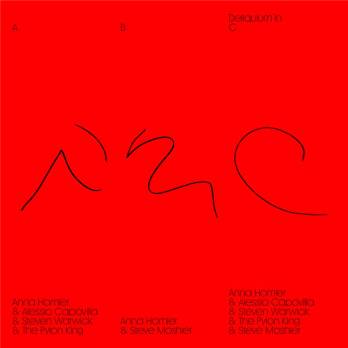 Known for her early work as Breadwoman, which was conceived in 1985 and brought together improvised live performance, mystical sound recordings, and downright disturbing bread masks, Homler has with her latest offering collaborated with Alessio Capovilla, Mark Davies, Steven Warwick, and the late Steve Moshier. In the intervening years, Homler has continued to make electronic music, and she also hosts Sound Kitchen, an experimental workshop exploring the musical properties of everyday objects.

Deliquium in C features pulsing drones, ultra-bright harmonies, and chiming electronic melodies. Homler’s voice becomes a mystical incantation, a dancing thing without any discernible form, moving from song to utterance to sigh. Her voice remains incredibly durable and strong throughout, upholding a thick, stark curtain of drone and choosing to remain in the foreground. The drone doesn’t uphold her voice, but her voice upholds the music, and that’s a sign of her vocal power.

Gentle and playful, Deliquium in C showcases Homler’s incredible vocal range and her impressive emotional depth. Every piece sounds different, each one becoming a different expression with a personality of its own. She’s clearly fascinated with the possibilities here, coming across as committed, inquisitive, and child-like at varying times. She’s dedicated to her craft, and this makes for elevated music.

The fifteen-minute title track goes to the outer limits. Its attire is sleeker, a darker shade, painted in tonal streaks of camouflage.

Through dense tonal forestry, Homler’s voice morphs to encompass and mimic a plethora of wildlife. Are those electronics, or are they emanating from strange vocal cords? Recognisable words fade away. A chorus fades away. Fascinating creatures enter, roaming through an alien woodland. Amber-eyed tigers emit throaty growls, and some kind of animal squeals from the tips of the trees. A dark paradise opens up, a strange, wonderful safari for the ears. Homler’s desire to bend the possibilities and stray into no-man’s-land is a wonderful gift. The record is full of curiosities and gingerbread trails…but are those growls a cunning trap, or is this a friendly species? (James Catchpole)