Moscow’s Kotä Records unveiled 20 releases in its first eight years; now the label has released seven albums in a day, one digitally and six on tape.  This is a crazy and cool idea, and we’re all for it.  The label who brought us great releases from artists including Burstbot and Silk Saw continues to expand our appreciation for the breadth of modern Russian music. 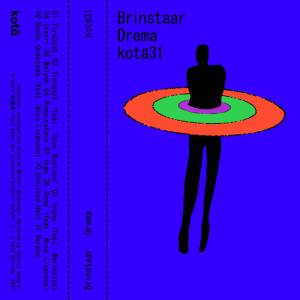 We last encounterd Brinstaar on Dream of Stone, a collaboration with Bred Blondie.  That release focused on spectrums and stone carving; Drema is more overtly musical, but just as mysterious.  The tape may begin with the sound of birds, but soon there’s all manner of percussion going on: scraping, tapping, hitting and pounding.  “Trehgork” (featuring Sea Boytsov) is an early highlight, establishing rhythm and tempo without sacrificing intrigue.  The piece sounds like a recording from Iron Man’s workshop.  After this blast, we’re not prepared for the appearance of a cappella Russian vocals, but here’s Marinessa, introducing the avant-industrial “Ivana,” which includes the fighting forces of breathy sax and synth.  “Icetri” incorporates throat singing and piano.  What a diverse album!  The cold timbres continue across the tape, with wind and icicles on “Malysh” followed by snoozing drone and xylophone on “Pumainaface.”  Nina Livanova guests on two tracks late, her wordless intonations pressed against cymbals, ice instruments and stalagtite drip in the first piece while stretching across silent horizons in the second.  The entire affair concludes with the 17-minute “Varana,” a slow grower that sounds like an active winter unfolding beneath the ice. 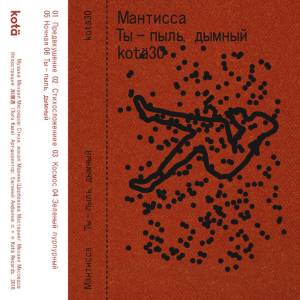 This brings us back to Marinessa, under the Russian spelling Манти́сса.  This ambient album has the same pedigree, as Misha is half of Brinstaar.  Thanks to the language, Ты — пыль, дымный will be a mysterious album to non-native speakers, but there’s no hiding the timbre: incantational, delicate, fragile and playful in turn, often in a single piece.  The music holds true, with glacial tones stretching across the soundscape of the opener and piano playing on the train tracks of the second.  Marinessa does not sing in any typical way; on “Kocmoc” she whispers, growls and lightly shrieks over thumb piano and strings.  Then as on the last tape, there’s a surprise: Lubomyr-style flurries on “Зеленый Пурпурный,” producing a softening effect after all that experimentation.  Another long closer (clocking in at 16 minutes) leaves the listener disoriented, given the manic laughter that dominates the final frame. 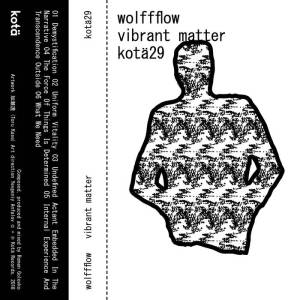 wolffflow seems to have an extra “f” in the name, but we’ll pass over it, as the music is so extreme.  vibrant matter is a drone/noise album, constructed to wreak havoc on speakers and eardrums.  “Demystification” sounds like a jackhammer army in a collapsing factory.  Beneath these cogs and chains and cranes, mysterious monologues unfold.  Are these songs or conjurings?  The oppressive atmosphere leaves it open to interpretation.  But when a TV broadcast gets stuck in a loop on the subsequent piece, repeating “I’m too scared,” one realizes that the fear is intentional.  And then the nihilistic “No more military, no more fun, no more anything, nothing.”  This is a difficult listen, perhaps best when one is in a funk or needs to drive away door-to-door salesmen.  The snatches of song on “The Force of Things Is Determined” are a bit more cheerful until they too are stuck in a loop ~ the sound of society disintegrating before our ears.  Ironically, closing track “What We Need” returns to the earlier theme, intoning “no more religions, no more politicians.”  This may be what we need, but is it all we need?  What humanity might replace this craven beast?