By postrockcafe / May 2, 2019 / Electronic, Field Recording & Soundscape / Leave a comment

We conclude our coverage of Kotä Records’ Spring Batch with three electronic releases and one field recording set.  But which is the future sound of Russia?  One thing’s for sure: the Moscow label has presented a plethora of choices. 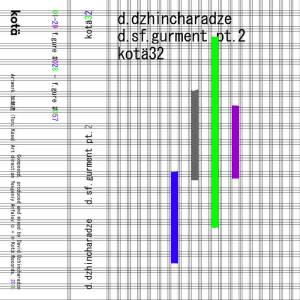 d. dzhincharadze (David for those who know him) is an outlier.  d.sf.gurment 2 is a techno album in form, but not in style; one would be hard-pressed to dance to these tracks.  And while 30 cuts sounds like a lot, they range in length from 00:41 to 17:16.  The artist seems far more concerned with tone and impressionism than the club floor.  Drums rarely appear, although percussive sounds appear from time to time.  The third track offers dense drone; the thirteenth is industrial; the sixteenth is noise.  The sparse nature of the release makes one wonder if some of these tracks might have been cut down, until one reaches the electro-acoustic seventh piece and appreciates the contrast between sound, silence, and inaudible tones.  The 21st and 23rd tracks carry this to the extreme, and may cause some to wonder if it is there at all.  Some of the shorter tunes – in particular “f.gure #038” and “f.gure #054” ~ imply fuller tracks waiting to break through.  Is the album incomplete?  It’s up to the listener to decide.  Many may find their perceptions expanded. 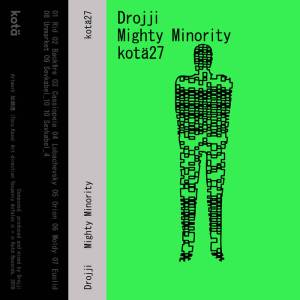 The two entries from Drojji, beginning with the digital-only Mighty Minority, are far more accessible.  As early as “Rid,” one encounters the thick drone that has been present on releases across the Kotä spectrum.  While not a signature sound, it crosses boundaries and offers a touch of unification.  The drone is joined by percussive hisses and clanks, a reminder that the roster remains experimental, even when participating in wider genres.  This duo does want listeners to dance, although certain passages will confound on first listen.  The second time around, dancers will know what to try and when to try it.  It’s fair to assume that someone, somewhere will do the Robot.  Blame the improvisational angle for the element of surprise.  There’s also darkness here, first apparent at the end of “Backfire” but never far from the surface.  When the winters are so bleak, one’s thoughts turn to night.  Fortunately the darkness is balanced by the light of the stars, as evidenced in “Orion” and “Cassiopeia,” and soothed by the geometry of “Euclid” and “Lobachevsky.”  But in the mighty minority, we don’t need to understand such things to dance.

Future Sound of Russia is the shorter release, although both would have fit on one cassette.  It also has the best cover.  The difference between this release and the last is the presence of vocal snippets, too short to be identified, but an integral part of the set.  FSOL is also relentlessly swift, borrowing from IDM to create an impression of machines gone awry.  On “Onomatopoeia,” a clear voice enters in the final seconds, creating a fun contrast.  The hyperactive “Badruddin” is particularly appealing, as caffeinated as a track can be.  Is this the future sound of Russia ~ a pace so swift few can keep up, information exchanged so quickly than humanity reaches overload?  This may be the future that awaits us all, on our way to inevitable collapse.  As a sci-fi prophecy, it’s massively entertaining ~ but it’s also a warning for us all to slow down, like the contrasting voice in the closing piece.

So slow down we shall.  The final tape in the series comes from Kotä’s own Gleb Glonti.  Things, That I’ve Learnt, Are From The Journeys is a collection of field recordings ~ what one might call the present sound of Russia.  It’s clear that conversation is important to Glonti; we lose some in translation, but the tone shines through, feeling comfortable and companionable.  And every once in a while, the curtain draws back on a lovely soundscape such as the self-explanatory “Vladikavkaz, Early Morning,” where the only talk is among birds.  On this cassette, trains rustle by in the distance, along with disjointed radio music.  Children laugh; dogs bark.  Rain repeatedly drenches the city streets.  “Like In Moscow” creates a techno beat with rocks, drawing a line back to d.sf.gurment 2 and the artist’s own Dream in Stone.  “Terminal E” offers a short blast of perfect percussion, while “Aged White Wine” captures a choir in perfect harmony.  While we associate Russia more with vodka than with wine, we do recognize the clink of glasses, the toast of friendship, the celebration of things that can only develop slowly.  This makes Things, That I’ve Learnt, Are From The Journeys a fine foil to Future Sound of Russia, a reminder that goodness has its own pace.  (Richard Allen)