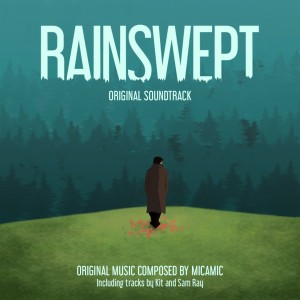 Meditative and continually tinged with sadness, the Rainswept soundtrack furthers micAmic’s growth into classical compositions, already aptly shown in 2016’s Downfall. Still, whereas the latter focused on the narrative qualities of melody, the earlier expands such focus into the field of ambient, combining melancholic and driven romantic pieces with slowly layered electronics. The result is often an impressionist mood that highlights the emotional force of the soundtrack’s melodic aspect while diffusing it into more pensive states.

The tragedy of the game’s story, in which your character investigates a double murder-suicide, comes to be reflected in the subtle shifts that pin the narrative to a background sadness that subsides as soon as it emerges – like all tragedies, it does not simply drag you to a downward spiral. Instead, it lingers, and it can be as disarming as it can be soothing, washing away any and all preoccupations with an essential grief.

Interestingly, while the use of both acoustic and electronic sounds tends towards romance, there’s another style upon which micAmic is quietly riffing upon: noir. Its jazz roots done away with, noir here works as the psychological soundscape of a broken (anti)hero and a context that is gloomy not because of its nighttime associations, but on the contrary, because of sorrow glimmering in the daylight.

As the melodies unfold into abstraction, the mystery provides small thrills, as in “Rainswept”, a track that only holds together thanks to the tensions between upward and downward moods, ultimately never resolving in favor of one or the other. The main theme, a lovely and bittersweet piano melody, sways with darkness in tracks like “Downpour” as easily as it drifts away with light in tracks like “The Old Woods”, the tragedy a wound that comes to identify the detective with the victims, the past with the present, hopelessness with hope.