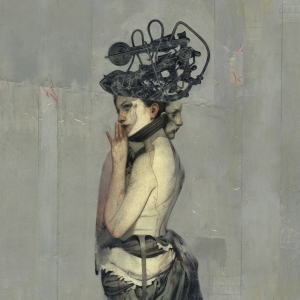 We’ve been excited about the debut album from Mexico City’s The Phonometrician (Carlos Morales) ever since we heard “The Fall of Cormonan” last fall.  And once we saw João Ruas’ steampunk cover, our anticipation went through the roof.  As usual, Lost Tribe Sound has done a magnificent job with the packaging, as one may choose between a sweet hardcover book and a magnified image on vinyl.

So what’s a mnemosyne?  We had to look it up.  Mnemosyne is the mother of the nine muses and the Greek goddess of memory.  (Give yourself a pat on the back if you knew this.)  In like fashion, this album “asks what memories would sound like if they were captured through sound.”  Textures are key, and apparent from the very first track: static, echo, reverb, rain.  As “We’re Burning” dissolves into fire, a female voice says, “Open your eyes,” her voice jumping the speakers in a manner guaranteed to attract attention.  We can’t help but think of The Matrix and other films in which a character is under some sort of spell.  Dreams and memory intertwine.  Echoing Inception and Edgar Allan Poe, The Phonometrician offers a dream within a dream.

The metamorphosing backdrops revolve around a solid base of acoustic guitar, which Morales plays with an energetic tenderness.  Vinyl pops populate “You Only Change Names,” a constant drumbeat providing a second anchor.  In light of the theme, one begins to view the instruments as metaphors.  Memory is a tricky thing, replacing itself like cells in the body, never in fixed form, frequently wrong, often abraded and eventually dissolved.  The guitar becomes the truth, the strings and other organic instruments the perspective, the electronics the ravages of time.

All of this comes to a head on “The Curse (When Memories Fade),” which follows the album’s most accessible piece, the lovely “Chloe.”  The electronics are so intrusive that they push the listener out of reflection toward concern: is the CD damaged?  Is the vinyl flawed?  No ~ these bruises are intentional.  This momentary mini-panic echoes that of a person who has a brush with memory loss and worries it may be dementia.  These disconcerting timbres will not last, which makes Mnemosyne a smoother set on repeated plays.  We’re going to survive this.

The album’s closing tracks return to a semblance of balance, as if accepting the ravages of time.  One might call this a gentle acceptance, like saying an old photograph is more beautiful due to weathering.  We lie to ourselves a little to justify the loss.  But there’s also a gentle invitation implied by the music.  All too often we return to memories of hurt, living in a past of slights, disappointments and regrets.  But our happy memories can glitter, providing light to our later years.  As Sasha Moorsom writes,

I hold dead friends like jewels in my hand
Watching their brilliance gleam against my palm
Turquoise and emerald, jade, a golden band

Loss need not mean only sorrow.  The open-ended track title “If I Died Tonight” begs for completion, yet guarantees only speculation.  The residual question is, will we wake up before we fall asleep?