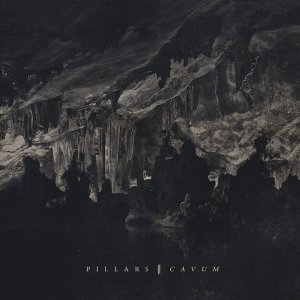 Can a post-rock band be both massive AND melodic? Absolutely.  This is the arena of Indianapolis (Indiana) quartet Pillars, who live so close to October’s POST! festival that they can sleep in their own beds.

“Dissolution” was the album’s lead single, an all-out stormer as well as a highlight of the recently reviewed sampler Open Language Volume IIII.  The power of this majestic piece sent us back to check out the full album, which is a lot richer than the single would imply.  In fact, only in contrast with the second single “Solace” does “Dissolution” make sense.  The album is designed to operate as a score to the battle between darkness and light, depression and hope, isolation and engagement.  And while “Dissolution” is all energy, launching right into the fire with rolling drums and rocking guitars, bursting into giant riffs after 45 seconds, “Solace” is more introspective ~ although not the album’s quietest cut.  That honor goes to the lovely “Coda,” which wraps back around to the opening “Escape.” Repeating the process, “Escape” eases the listener gently into the album, but explodes two and a half minutes in; ironically (and perhaps intentionally) the same spot at which “Dissolution” slows down.  One can feel the battle as it rages.

Bandcamp fans are split on their favorite tracks.  “Dissolution” gets the most attention, but “Black Prayer” comes close and “Dying Light” enters the discussion as well.  Six comments, three faves on an album with only six tracks ~ there’s no filler here.  This is the rare album that one wishes were longer, but on the other hand, it’s great to encounter a set in which every component is crucial.  Cavum may be the Latin word for pit, but these tracks also provide ladders.  The addition of uncredited brass and string timbres, first surfacing in “Dying Light,” contribute a twinned sense of melancholy and yearning.  We may be in the pit – as people, as a society – but we don’t choose to be.

In the end, Cavum energizes as well as envelops.  The band has come a long way in a short period of time.  Some may recall that they once incorporated vocals ~ now they are saying more than before, yet without words.  The only bit of conversation arrives at the beginning of “Coda” as a family is putting away the dishes: a kind, domestic touch hinting that every hurt may yet be healed.  (Richard Allen)