We Lost The Sea ~ Triumph & Disaster 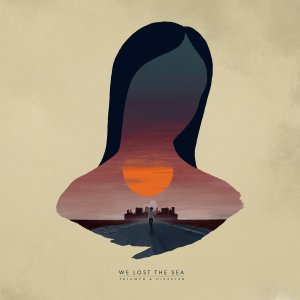 The world is ending.  We all know it.  While writing this review, I learned that the American president had just allowed corporations to pollute water again.  After all, who needs clean water?  Who needs animals (save for those that taste good)?  Who needs humans?

The album is apocalyptic, taking the form of a fairy tale.  A mother and her son are living out their final day on Earth.  Sydney’s We Lost the Sea scores their tale with alternating passages of aggression and sorrow.  Their last album, Departure Songs, used history as its starting point; Triumph & Disaster visits the near-future.  The shock is that it no longer sounds like science fiction.  The science is real, even as our politicians deny it.  Meanwhile, the earth is ravaged by hurricanes, wildfires, and the worst threat of all ~ us.

This album won me over with just one song, but what a song, alone worth the cost of admission.  “Towers” is a quarter-hour behemoth, a statement of confidence by the band, who go all out like the musicians of the RMS Titanic, playing while the icecaps melt, a reversal of plot.  The track is filled with the peaks and valleys post-rock fans adore, culminating in a piano breakdown that sets the stage for a savage attack: the drummer and four guitarists giving all they have, playing while the planet burns.

Many bands claim the word “apocalyptic” but fall short of the word “epic.”  We Lost The Sea rises to the occasion.  Track titles “Tower” and “A Beautiful Collapse” will remind readers of 9/11, a smaller desolation than the end of the world, but a significant marker; global readers may recall the Tower of Babel and the book of Revelation.  The band is already six strong, but on two tracks they add trumpet, another link to that apocalyptic book.  In Joshua, the priests blow the trumpets, and “the walls come a-tumblin’ down.”  In Revelation, there are seven seals and seven trumpets.  In the Quran, the trumpet is blown by Israfil, the angel of music; and then the world ends.

Remember you are dust, and to dust you shall return.  “Dust” sounds like a lonely desert ravaged by nuclear fallout.  Mother and son reminisce, hold each other, say their goodbyes.  We Lost the Sea calls the album “a sad love letter to the collapse of the planet,” but it is also a farewell to love, and to every achievement we thought worthwhile, all downed by hubris.  In “Parting Ways,” the band rouses itself for a melodic tribute to all that has been and could have been.  The Doomsday Clock teeters at two minutes.  But wait ~ this is a fairy tale, correct?  This is science fiction?  There’s still time for us?

Before we reach the end, there’s time for another quarter-hour Ghidorah, the blistering “The Last Sun.”  Three minutes in, a deadly hum, followed by an elegy and a raging protest.  The band leaves it all on the table.  Every note that can be played is played.  Every hit the drum can take, it takes.  Just like the earth.  But there’s a breaking point.

The album saves its sucker punch for the finale.  The specialists speculate that we may only have two decades to turn things around, before collapse becomes inevitable.  But what if their estimates are just a little off?  “Are we really too late?” sings Louise Nutting in the only vocal track, a mother lamenting that all the efforts to make a difference were already doomed.  The statement leaves the listener jolted and drained, picturing a barren earth, cracked and orange.

This is the last album you will ever hear.  (Richard Allen)