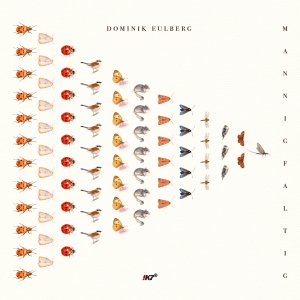 In We Are the Weather, Jonathan Safran Foer laments the fact that climate change, despite the incredible threat, is also incredibly boring to talk about.  Species die, coastlands disappear, and our eyes are riveted to scenes of rescue; but then the statistics arrive.  Our eyes gloss over.  We wonder, briefly, if there’s anything we can do.  We return to our hamburgers.

While Foer uses humor to make his point, Dominik Eulberg uses love: specifically, a love for individual fauna.  Returning after an eight-year absence, he writes, “music only makes sense for me if it has something to say. And I have something to say now!”  Mannigfailtig (Manifold) is a gorgeous, all-enveloping release offered with a fun visual component: a pocket-sized memory game showcasing the twelve species referenced on the album, each with a salient fact.  The name of each species also includes a number, one through twelve (although Eulberg admits he made a slight compromise on #11). 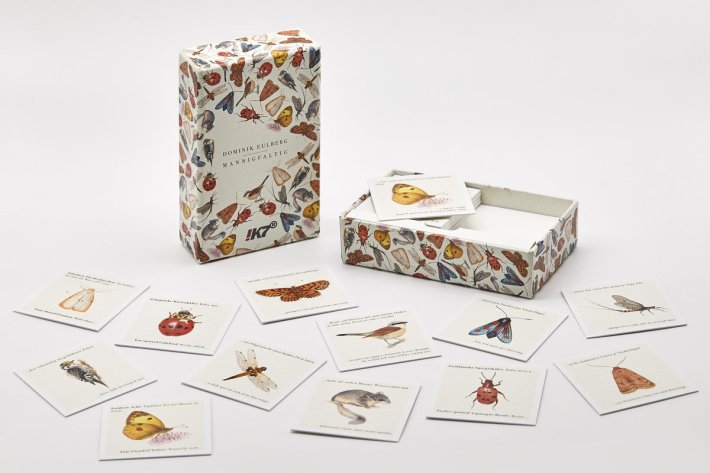 At 87:25, this is one of the longest CDs most will ever own.  (There’s also a double-LP version.)  Leave it to the Germans to be able to figure out how to squeeze so much music on a glass circle with incredible clarity and crispness.  The album is laden with bells, chimes and reminders of the great outdoors.  The warmth is endearing, the timbres hopeful and upbeat.  Some may recall the classic roster of Morr Music; others may smile at the title bestowed on the artist:  “King of Naturalist Techno.”

Eulberg has found a new purpose, and yet he preaches without words.  The spectrum and beauty of Jan Haft’s “Goldene Acht” builds on the template of Macrocosmos and Winged Migration, utilizing slo-mo, time lapse and macro photography.  Battling bunnies, a gliding owl, a lone wolf and many more are featured briefly; longer shots are found in the library of nautilusfilm (Natural History Germany).

The album flows so beautifully it’s recommended as a suite.  One can get lost in this album as one does a forest: not literally lost, but losing track of time while giving in to wonder.  Over time, some tracks or passages within tracks will begin to stick in the memory like a purple butterfly or the refracted back of a beetle.  The briefest track, “Dreizehenspecht,” is marked by a memorable hammered melody, paving the way for ebullient synth.  “Siebenschläfer” (which sounds like a beer but is actually ~ *shudder* ~ an edible dormouse) is the most playful piece, a collision of handclaps, synths and chimes that sounds like a room of caffeinated music boxes.

At the very least, we will not be eating that mouse.  But Eulberg, like Foer, Greta Thunberg and so many others hope we’ll do more.  They represent a world that is beginning to converge on the issue of climate change:  politicians be damned, we’ve got to act.  This world is too beautiful to lose.  There are so many ways to do our part ~ marching, writing, planting, bicycling, recycling, cutting down on meat.  None on their own is enough, but a manifold approach will work.  As the hundreds of thousands of youth who filled the city streets on September 20 so succinctly put it, “We want to live.”  As do the Eurasian three-toed woodpecker and the New Forest Burnet.  (Richard Allen)