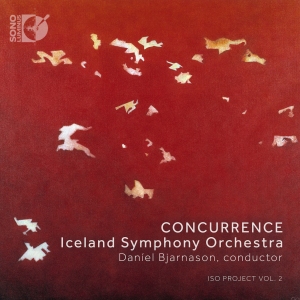 The Sono Luminus follow-up to the 2017 CD Recurrence affords listeners a golden opportunity to hear new works from Anna Thorvaldsdóttir, Haukur Tómasson, María Huld Markan Sigfúsdóttir and Páll Ragnar Pálsson as performed by the Iceland Symphony Orchestra and conducted by Daniel Bjarnason, and all without the cost of a plane ticket.  Otherwise we might have to wait months or years for new albums from each composer, which makes this album an invaluable preview.

In one of the strangest coincidences of my entire life, I happened to be reading John Mauceri’s excellent new book For the Love of Music when the CD changer landed on Concurrence, plunging me into Thorvaldsdóttir’s “Metacosmos” at the exact same time as Mauceri began to discuss the work ~ the very definition of the album’s title.  There’s no explaining such an event, except to remark that the book and album will forever evoke a magical connection.  Mauceri discusses the manners in which reviewers often befuddle readers with esoteric descriptions, while encouraging listeners to draw their own associations from the music, even if they may differ from the artist’s intentions.  The composer writes that “Metacosmos” is “constructed around the natural balance between beauty and chaos” and inspired by “the speculative metaphor of falling into a black hole – the unknown.”  Given such a description, one can hear such tension in the work, just as one may conjure a visual collision of Icelandic landscapes ~ the emphasis of Steve Smith’s liner notes.  Those fascinated with symbolism may also note the duration of the piece on the disc ~ 13:13 ~ albeit longer in the clip below.

Thorvaldsdóttir has always been a conveyer of the unknown, her non-linear music a treasure trove of tones and trajectories.  “Metacosmos” begins with a drone that leads swiftly to a crash, like a Big Bang, and a series of dissonances meant to dislodge the listener from expectation.  There’s more melody here than Mauceri lets on, although the melodies are unmoored from common notation.  More important is the feeling that one is headed into great darkness, unable to turn around, which leads to the question, “how do we feel about this?”  The answer will differ from listener to listener, as some will choose fear and others courage, the same range of reactions one might feel when facing a great internal darkness or inevitable, life-altering event.  Glissandos are only the starting point; some of the mid-piece chords might even be considered triumphant.  Startling percussion leads to the launching of foghorn tones, signaling battle.  The music grows frantic.  But when only three minutes remain, a blending note like butter spread across toast.  In a merciful sequence of major chords, balance is restored.  Or is it?  The piece concludes with a rising pitch, the ending left open to interpretation.

María Huld Markan Sigfúsdóttir’s “Oceans” seems ~ literally ~ more down to earth.  While this is the album’s third track, Smith chooses to pair them in his liner notes, so we’ll do the same here.  There’s actually a continuity to be sensed from the end of “Metacosmos” to the beginning of “Oceans,” found in the more accessible moments.   Thorvaldsdóttir leans into such segments reluctantly and highlights them only briefly; Sigfúsdóttir embraces them and allows the more difficult themes to signal from the outskirts, always present but never a threat.  One hears grand themes, like the return of the sailor, the embrace on the jagged shore.  The tones seem always about to clash, but the composer pulls back just in time, like a ship avoiding the rocks.

In contrast, Haukur Tómasson’s “Piano Concerto No. 2” and Páll Ragnar Pálsson’s “Quake” highlight single instruments, in turn the piano and the cello.  Counterintuitively, the power of the former is in the contrast between the playfulness of the piano and the mercurial quality of the strings.  The orchestra makes the ivories seem more frightening than they are, a fact that Viningur Olafson seems to address when he slows the whole concerto down, allowing space for introspection should the listener choose. Then into the maelstrom once more.  One might interpret the tension as that between the enjoyment of life and the worries of the world, or the comfort of friends and the crassness of public discourse, but such are only suggestions.  The piece continues to unsettle, landing on notes no softer than the start.

Finally we arrive at the award-winning “Quake,” whose success has already inspired a follow-up, suitably titled “Afterquake.”  We loved Páll Ragnar Pálsson’s Nostalgia and the new work continues to justify our faith in the composer.  Due to the title and timbre, the piece recalls the Norwegian diptych “The Wave” and “The Quake,” and as the most cinematic piece on Concurrence, it lends itself well to premonitions of disaster.  One can hear the creaks of crevasses on the brink of collapse, the panic of scientists whose prognostications remain unheeded, and finally the all-out panic as the tectonic plates shift.  Saeunn Thorsteinsdottir’s cello is often overwhelmed by the reverberations of the orchestra, but shines in quieter moments, such as the immediate center of the piece, accompanied by foreboding percussion, most curiously a single hit on wood block.  When the cracks begin to break, they sound like shattering ice.  In terms of natural disasters, Iceland is better known for volcanic eruptions, but the two are related, and in fact, hundreds of minor earthquakes may occur in Iceland in a single week.  “No cause for alarm,” says the Icelandic Meteorological Office, but many are still “waiting for the big one.” Pálsson’s piece is a reminder not to relax too much; it’s also a thrilling story in its own right.

Concurrence reminds us of Daniel Bjarnason’s consumate skill as a conductor.  In his capable hands, the Icelandic Symphony Orchestra triggers its own tectonic shift.  This album is where to turn to hear tomorrow’s music today.  (Richard Allen)