Cicada ~ Hiking in the Mist 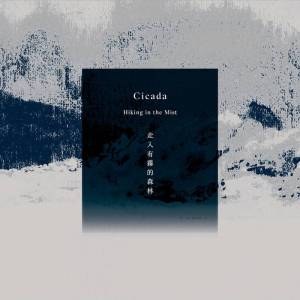 Hiking in the Mist is a departure of sorts for Cicada.  The group is now down to a quartet, but they’ve realized a life-long dream: leaving the ocean behind, the four have ventured into the forest, both literally and thematically.  In the first two videos from the album, one can even see the band hiking (although there are five again, we believe the fifth is a friend or guide).  Water still has an impact (“Mountain Stream,” “Sudden Rain”), but the trail is as important as the view.

The album is conceived as a “hiking journal,” inspired by walking; and an invitation to fans to take the album with them when hitting the trails.  For the first half of the album, the presentation remains relatively simple: repeated melodies on piano, lovely orchestration on strings.  The early tracks imitate the repetitive pace of walking, the initial anticipation, the energy and wonder.  And while everything remains just as pretty as we expect from Cicada, there’s a sense that more may occur ~ which is exactly what a hiker might feel as they approach a summit or visual goal.  All of this changes in the exact center of the album, as “Overlook Where We Came From” introduces new timbres, and in its second half, new complexities.

The guitar becomes for a short time the central instrument.  And then, for the first time, drums (heard in the studio version below, albeit not in the studio session above).  It’s as if Cicada has discovered the forest within themselves.  The interplay between violin and cello is particularly lovely here, the piano no longer miked up close but performing a perfect supporting role.  These instruments are made from wood: the forest tamed, the notes reflecting their genesis.

“Sudden Rain” flips the script further.  No longer is the sonic field littered with sound; now there is restraint, reluctance, reflection.  Even a bit of dissonance creeps in, but not much ~ this is Cicada after all!  When the pace quickens, the melodies multiply, and the transition feels earned.  It’s tempting to think that the tracks are presented in the order they were recorded, as evidence of evolution from the simple to the elaborate, the masses to a small circle of friends.  Compare the tenderness of the piano in the closing piece to its overt use in the opening piece, and one becomes aware of the distance traveled.  The hike has made an internal difference; the band has brought home more than dirt and leaves.  The soft landing of the final minute is like coming home.  (Richard Allen)