The curse of compiling annual lists of our favorite releases is that a few soundtracks are always released too late in the year for us to properly digest. Over the next two days we present a couple of albums that would have been worthy additions to our list of 2019’s best videogame soundtracks. They set a very high bar for videogame music in 2020 ~ one we may be unable to ignore come the end of the year. 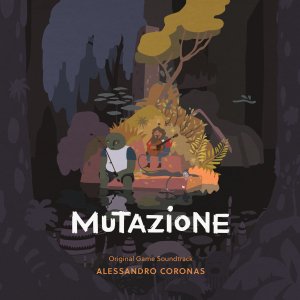 Emerging from a popular flat-pack furniture store on the first weekend of the new year, I was both amused and gratified to see so many customers wielding impressive new house plants. Starting the year by inviting a piece of the outside inside, to provide nature’s counterpoint (however faintly ironic) to the consumerist, throwaway clutter that descends during Christmas. Or maybe they just look nice. Either way, the presence of domestic greenery provides comfort for many. Soundtracking a self-proclaimed “mutant soap opera” adventure game wherein the protagonist learns about her botanist grandfather’s work, Mutazione is a generous and spacious set that invites you into its verdant world.

Luxuriating across 36 tracks of mostly ambient reflections, this four-hour set exudes a sense of harmony and precision that calls to mind the tending of a garden. It ends with a series of suites that are longer and more developed than the bulk of the earlier tracks, which swap length for precision. And the smaller and quieter this set gets, the more exacting it becomes. Spanning 18 minutes, the trio of “What’s on the Menu” tracks are among the quietest, as scattered guitar and piano notes caress then depart like a welcoming breeze, while an assortment of chimes sprinkle their idyllic dissonance over the yard. This is just one of many combinations of instructions presented across the set ~ from guitars, piano and myriad synth sounds to mallet percussion, chimes, kalimbas and music boxes ~ yet Alessandro Coronas never overwhelms the palette. Most pieces feature just two or three voices, and some, like the humble nylon strumming of “On a Date”, just one. Like all good gardeners, the composer recognizes the equal importance of space.

This is also a set of exploration. During the one-two of “The Trip” and “Karoo”, we move from evocative reggae to unsettling sound composition. “Modular Cloud” is the perfect name for a piece that sounds like a solitary synth bouncing towards the stars, “Papu Tree” has the makings of dreamy synthwave but slowed down to a mesmeric crawl, and “Into the Wild” exposes us to a vast canopy of stars, distant and cold. And on occasion, female vocals like the quiet humming of the contented drift through the still air. Despite the incursion of the surreal and even the mutant, this garden remains a place of sanctuary.

What may upset your equanimity are the brief barrages of lo-fi grunge and punk scattered across the set, including in the title and credits themes as well as the shoegazey “Ritual”. Some may stumble over the brash “Riot Girls” tracks, complete with heavily distorted vocals, but the anarchic spirit of these few renders starker the sedate, accepting nature of the many.

‘Our hope is that players will feel inspired to compose and savour their own musical soundscapes ~ for listening while reading, cooking, walking, living.’ – Douglas Wilson, developer at Die Gute Fabrik

In the game, the music is intrinsic to cultivating the gardens the protagonist tends to. On its own, the music equally cultivates a sense of tranquility in the listener, and to listen to it is to feel both soothed by and lured further into your environment. (Chris Redfearn-Murray)