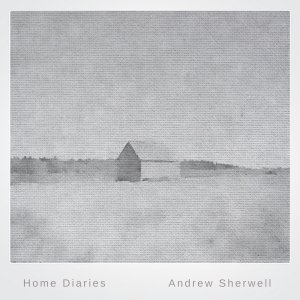 For the past month, Whitelabrecs has been releasing an EP or an album each week in response to the COVID19 crisis.  Artists were asked to send in their material as a reflection of their experiences in lockdown, quarantine and isolation, and have responded with lonely, lovely works.  The first arrived from Argentina, as Mi Cosa de Resistance recorded his tracks in a single, productive day.  Spain’s Edu Comelles contributed the single, 22-minute piece, “Mirar Lluny (Look Far Away),” a restive marriage of piano and cello, a lullaby for his newborn twins.  Recording as Brusgenerator, Berlin’s Felix Gebhard found a home for his soundtrack to a cancelled theatre production; this lightly dramatic music became the score to “home cooking, sights from the balcony and watching movies.”  New this week, the U.K.’s Andrew Sherwell contributes a fuzzy meditation on solitude.

Perhaps I gravitate most to Sherwell’s entry because his experience is similar to my own, despite the difference in continents.  Sherwell writes of “the hidden beauty of solitude” and the repetition of new routines, which include “quiet walks to and from work in the evenings.”  Heavy field recordings form a constant backdrop, first appearing as static and rain before transmuting into waves.  The sea washes over the musical ambience like a cumulative calendar, reflecting the title “Circular Days.”  Back and forth, around and around, repeat.  In “Balcony Views 3am” the wind becomes the main character, along with the crackling and rustling of nearby objects.  It’s all forlorn and grey, like the cover: an image repeated with every Home Diaries release, the color filter chosen by the participating artist.

But then a tiny bit of light breaks through.  Midway into “Balcony Views 3am,” a filtered choir offers a modicum of hope.  These are trying times, difficult times, impossible times.  Yet there is still “beauty in solitude” for those fortunate enough to locate that quiet center.  Even as the choir recedes and the wind continues, their memory offers encouragement; and the harmonies don’t hide for long.  The title “End of Another Shitty Day in Paradise” is tongue-in-cheek, because on the one hand, it was another long and lonely day, but on the other, we got through it, and for most of us, another awaits.

We’re all facing the crisis in different ways, but by sharing their own home diaries, these musicians are sending something good out into the world when it is most needed: calm, reassurance, empathy.  Look for a new installment each week until the clouds have cleared.  (Richard Allen)