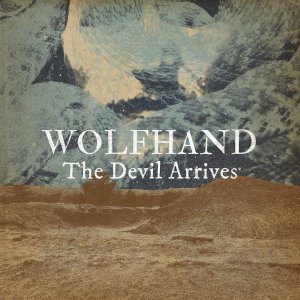 We love the instrumental spaghetti western doom genre, although few releases qualify.  Wolfhand‘s new album is an exemplar.  The band cites Earth, Dirty Three and Barn Owl as references; we detect hints of Murder By Death and Red Dead Redemption.  The quintessential western sound of pedal and lap steel marks its territory. A smattering of vintage dialogue from classic westerns offers a framework upon which to hang an imagined narrative, like a wide-brimmed hat on a rusted hook. Huge riffs, deep bass, keys, synths and drums complete the sound of this Burlington, Vermont quintet, proving that one need not live near the Old West to sound like the Old West; Burlington is the New East, only 95 miles from Montreal.

The band has been warming up to the album for years, releasing a series of tracks, demos, an EP and a live set.  Most of the early pieces reappear refurbished on The Devil Arrives, with the notable exception of “Plague Bearer” from the Plaguelands EP.  There’s also been a notable change in font, from the clunky all-caps Engravers Old English to a more pleasing serif.  We applaud this decision as the band seeks a higher profile.

When the wind blows across “Saloon,” one can imagine that horn-headed character entering.  A man sits solo at the piano, thoughtful, unaware of the clouds forming inside and outside the premises.  The dynamic contrast adds to the album’s drama.  The sample that launches “Bandit Cult” (“You’ll never make it with all that gold alone”) enhances the sense of growing menace.  Church organ keys intimate a battle between good and evil, although there’s no sense that good will win.  The Old West is a lawless place, rife with thievery and malice.  What chance does a hero have?  Ignoring the likely chances of a malignant outcome, the album slouches inevitably toward “High Noon,” preceded by a soft interlude, the calm before the storm.  There’s a trace of melancholy at the start of the piece, as benefits the scene; someone is about to die.  Potential widows stare through shuttered windows.  The violence erupts in a swirl of dueling guitars; then a restrained reloading, followed by more brutality.

The penultimate track, “Doomed Convoy,” is also the album’s oldest.  First appearing in 2017, the piece swiftly became the band’s signature set closer, as demonstrated on Live on KBKM, but in early days the band lacked a bassist; now their sound is much fuller than it was on their demos.  As climactic as the piece may be, the band made another wise decision in adding “Gallows” as the album’s coda.  In title and timbre, this quieter piece completes the story and makes The Devil Arrives succeed as a concept album, rather than as a series of thematic tracks.  The fire crackles as the tale is told.  We await the summer tour.  (Richard Allen)