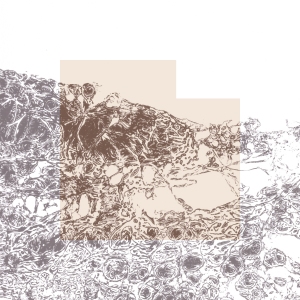 Il Tempo Della Nostra Estate is the first release in the digital-only Lifelines series from Slowcraft Records, curated by James Murray with artwork by printmaker June Murray.  The purpose of the series is to present “vital and consoling works,” of which we are in great need these days.  Hold tight, writes James, whose own ambient works have been a lifeline for others over the years.  Only six months ago, Murray released an album titled Embrace Storms, not knowing how timely the advice would turn out to be.

Federico Mosconi is a perfect choice to lead off the series.  His music is restive, but never sounds thin.  In the opening track, ambient waves wash across static charges as an acoustic guitar appears and disappears like the lifeline of the series title.

The album title is roughly translated, The Time of Our Summer (as opposed to summertime), and every shimmer is reminiscent of heat, humidity, and the season we all hope to be able to enjoy.  Now more than ever, it seems like a dream, a summer that may never arrive, or may happen to other people, or may be dangled tantalizingly out of reach.  But there’s a metaphorical meaning to be gleaned here as well.  The time of our summer may mean the time in which we are doing well or the time of our thriving.  For many, these times may seem far off, but for some, they are already happening.  Mosconi’s music seems to say, you can be in summer right now, if you want it.  Times have been rough in his native Italy, but the Italian spirit has also come through: a familial joy that is difficult to quash.

The twined forces of background drone and foreground guitar seem like battling streams of thought: a dense fog of blurred routine addressed by a clear voice, nudging the listener toward hope.  In the title track, organ notes and Elisa De Rossi’s ephemeral voice contribute a sense of well-being.  The effect is calming, as anxieties are not strong enough to swim across this sea.  “In Silenzio Leggero” (“In Light Silence”) is a conundrum of a phrase; isn’t silence silence?  But we understand the implication.  The gentle music leads the listener to a quiet shore, or as a previous track explains, a “bright calm.”  As Mosconi’s music recedes into the “Notte Fragile” (“Fragile Night”), we realize our heartbeats are slower, our minds quieter; we are indeed consoled.  (Richard Allen)