We first mentioned Human Savagery back in January 2017; since then the film has been making the festival rounds to universal acclaim.  This year the score has finally been released, and what a time to do so!  The themes of environmental degradation and human greed have never seemed so timely.  As the pandemic rages around us, the United States government has used the crisis as an opportunity to cut back or even eliminate environmental regulations, while uneven responses have laid bare the global inequities between rich and poor – the latter forced to further plunder already limited resources.

As the strains of “Mother” cut across the speakers, a gentle, wordless female voice offers soft comfort, soon washed away by the encroachment of the first drone ~ in the same way as Mother Earth is ravaged by those who wish more than a fair share of its bounty.  The camera moves lovingly across the landscape; Jeremy Bible‘s aerial imagery is a constant delight.

Rail cars and barges bisect the scenery.  A sweeping shot of abandoned cars delivers the message without words.  The “Plague” has begun.  While the original interpretation was likely that we are the plague, it’s impossible not to think of the current pandemic.  The two are intertwined, as the earth may be striking back, her healthy cycles disrupted.  And who knows whether a cure might have been found in the millions of species now extinct as a result of our existence.  At 1:16, the timbre turns ominous, with a sudden crash, dark strings and dissonance.  There’s something wrong about the color of that water.  Beauty reigns here, despite the danger: see, it’s still pretty!  But the position is impossible to defend; the best artists can find beauty in destruction, but the beauty never justifies the damage.  The third segment (4:20) begins with images of a power plant.  We know where this may lead: the smoke above, the green below, but not for long.

“Extinction” follows: the extinction of nature, or the extinction of man?  Perhaps both.  We hear the birds; but where are all the trees?  (An earlier generation asked, “Where have all the flowers gone?”)  Combined with the languid instrumentation, the field recordings are reminiscent of Jonathan Elias’ related project Requiem for the Americas, now 30 years old.  Then the tempo changes shockingly, along with the pace of frames.  The eruption of “Centuries” in image and sound cements the place of Human Savagery among its predecessors: The Qatsi Trilogy (Koyaanisqatsi / Powaqqatsi / Naqoyqatsi) of 1982, 1988 and 2002, Baraka and Samsara (1992 and 2011).  The only difference is the absence of humans in Bible’s work, which allows viewers to focus on the earth.  Just be warned: you may jump out of your seat 20:07 into the film, or 6:47 into “Extinction” on the stereo.  These rapid-fire images include a smokestack that seems like a turret, swiveling in our direction. 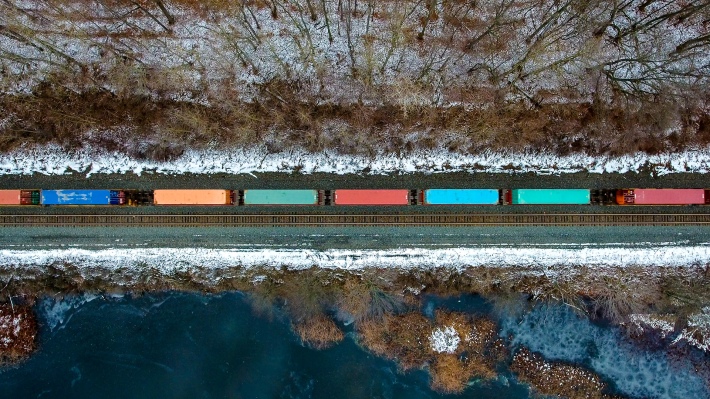 Elegant, classically-influenced music follows, along with water that looks like blood, an image both Biblical and apocalyptic.  “Centuries” may be gorgeous, but it ripples like an aftermath.  The sense of pathos continues in “Slow Violence” with majestic chords and rumbling undercurrents.  The colors are brilliant: to co-opt a sardonic bumper sticker, we’re going to leave a beautiful corpse.  Electronic drips seem like stalactites, until mechanical sounds make one think of factory pollution instead.  We have entered the winter of “Broken Ecologies.”

The implication of “Anthropocene” is clear even in its title: the current geological age where humans are now “the dominant influence on climate and the environment.”  We were warned; we’re still being warned; and after feeling the effects, we’ve continued our chaotic path.  The light environmental gains made during the pandemic (cleaner skies, clearer air, animals and birds relaxing, species propagating) will likely soon be wiped out again.  In the title track, Bible lays it all to rest.  The contrast of elegant strings and dissonant drones represents the battle between nature and humanity, two forces who were meant to strike a symbiotic balance.  Garbled voices reflect our rush to technology; a field of discarded tires serves as an indictment.  Once again, the power plant; the beats increase like a troubled pulse.

The final image pans out over the sea, with ominous chords reminiscent of “Jaws.”  One expects to see the Pacific Garbage Patch.  But the water is placid, as the world will be without us.  (Richard Allen)