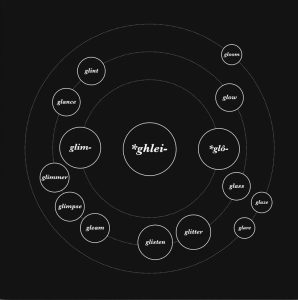 A wealth of material arrives with Sing the Gloaming, enough to power a dissertation.  And yet, the release itself is pure and simple: an exploration of words that start with the letters gl.  The project is reminiscent of the classic children’s program The Electric Company, but for adults.  The same team has already brought us brilliant projects such as Concrete Antenna, and the brand new Blackford Hill label is Simon Lewin’s expansion of the Random Spectacular imprint.

The obvious forerunner is Björk’s classic “Gling Gló,” with its amazingly catchy chorus, “Gling gló, klukkan sló” (often misheard as “Gling, glow, quick and slow”).  That same spirit of adventure is found here.  The joy of these singers is enough to make one think about favorite phonemes, and to  send one looking for other words that begin with gl.  S is my favorite letter, while the Icelandic hj (as in Hjaltalin) is my favorite digraph.  As for gl, my top ten (and trust me, I did not have one prior to Sing the Gloaming) are glow, glass, glisten, glissando, glean, glaze, glade, glint, glacier and glorify, while I’m not too partial to gluten and glutton (neither of which is heard here).  There are hundreds to choose from in the English language alone.

The project has already been an art installation, and in one instance we’re not sure why the collective chose the word “forest” instead of “glade” to describe the location.  Better alliteration is found in the description of “light, language and landscape.”  Vocalists selected relevant phonaesthemes (words whose sounds imply their meaning), including some of my own favorites (Huzzah!) along with glitter, gleam and gloom.  Apparently all of these words stem from a single single word spoken near the Black Sea.  (Could it be glyceraldehydes?  It’s actually ghlei.)  Then they passed their recordings along to the next singer, producing a phonic form of exquisite corpse.

The video for “Phonaestheme” demonstrates the connection between the gl sound and light.  One starts to make other connections as well: the æ of glass, also found in candle.  The hexagonal grid recalls experiments with Hasbro’s Lite-Brite.  When the father voice intrudes, it seems an antagonist, so sweet the prior pronunciations have been.  Soon he is seen as an ally in the dance, while the “ma-ma-ma-ma-ma” at the center of glimmer becomes a child’s expression of love.  The pse of glimpse sounds like a syllable one might speak to a cat.  Younger viewers will also love the video for “Reconstructed Forms.”  Look, there are our good friends glimmer and gleam!  And a bit of Björk to boot!  The images are simple yet playful, the sound somewhere between Fovea Hex and Hildegard von Bingen.

Vocalists were asked to record in places “where light moves,” but their very voices convey light to the listener.  “Borrowing” becomes a type of techno dictionary as vowels and consonants mingle among the beats.  The brief “Organized Breathing” incorporates the sound of breath, a timely subject in light of the appearance of James Nestor’s Breath: The New Science of a Lost Art on international bestseller lists.  “Onset and Rhyme” spreads words like butter across the page, allowing them to melt in the heat. When all is (literally) said and done, we have a new appreciation for sound, language, and the origins of utterances.  What was once dry and inaccessible has now become glamorous.  (Richard Allen)