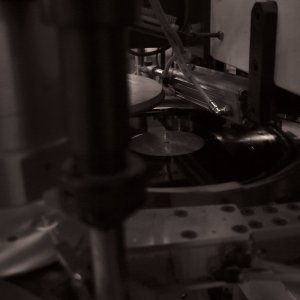 Pali Meursault has been having a prolific year.  In January, he released < strikes >, a strong piece of “protest trance music” from Chile highlighting the percussive sounds of pots and pans.  Next week he’ll team with Lee Patterson and Frédéric Nogray for the double album Roomtones; his segment tackles “the electromagnetic activity of failing neon lights” and more.  In May, he released { PRESS }, a gift to vinyl aficionados everywhere.

The press is question is the record press, so it’s only fitting that the release is vinyl-only: a rare and brave choice in the digital era.  Over the past few years, we’ve seen a vinyl resurgence, followed by a vinyl shortage, followed by the news that new plants would soon open, followed by a pandemic.  But there’s no denying the tactile pleasure of a record, accompanied by nostalgia in collectors old enough to remember when the format was preeminent.  To sweeten the pot, { PRESS } completes a nearly decade-long “mechanist trilogy” which began with Offset and Mécanes.  Letterpress and vinyl machines share a common heritage; the new album was recorded at Leipzig’s R.A.N.D. Muzik.

It’s important to note that this record about records is not about the sound of the needle in the groove, but the three stages of manufacturing: electrotyping, pressing and packaging.  Don’t expect any cutting and scratching, at least of the turntable kind.  Instead, be prepared to hear the sounds of how records are made, including typically unheard electromagnetic discharge.  This may be musique concrète, but it’s also musique plastique.

The first movement imitates a sine wave, as the electrotyping (also used in letterpress) prepares the template.  This is music used to make music.  The flutter fades to reveal the second movement, more obviously mechanical.  One can picture the pressing and release, as robotic arms create a form of field recorded techno.  Far from being repetitive, each repeated motion introduces a different nuance to the equation, and Meursault’s stereo effects make the room in which it is played seem a lot bigger.  Even the buzzes and beeps seem part of the equation; in this segment, nothing overheats.  The comparison to industrial music is on-point, as the music is reminiscent of some of the genre’s pioneers, and a far cry from EBM.  Steam sounds introduce the concluding movement, along with the natural percussion of process.  Do the people of R.A.N.D. dance while packaging, even when their records lack a beat?

Side B is a series of 33 locked grooves (impossible to do 33 1/3 locked grooves, but close enough!)  Together they comprise only the length of a single.  One can imagine their use in other records, as these grooves do tend to be groovy (sorry, couldn’t resist!).  These are simultaneously some of the shortest and longest tracks one will ever own.  One may sound like a typewriter, another a teletype machine, another a ping-pong rally; listeners will form their own associations.  It’s all part of the beautiful process that brings our favorite format to life.  (Richard Allen)