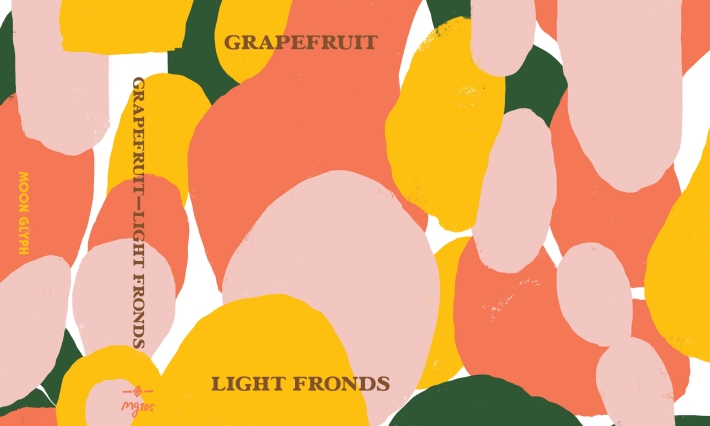 Who could resist a psychedelic synth album about grapefruit?  Certainly not us, during these steamy summer months in which a grapefruit can help prevent scurvy and a grapefruit-infused beer can stave off thirst.  The Lite-Brite tone of this tape drew our attention, and it doesn’t hurt that the cover (shown above in its unfolded glory) includes the colors of different varieties: red, pink, white, Star Ruby, Oro Blanco, Melogold.

Cascades of synth wash over the listener in “Divine Invasion,” an early highlight that sounds less like an alien invasion than an invasion of umbrellas at a never-ending beach.  Time seems to dissolve while listening, melodies blending into each other and tumbling like glass in the sea.  It’s ironic that the only piece to specifically mention time (“Time Drips”) is also the only one to call attention to time’s finitude over its fluidity; at 1:29, the piece is over as quickly as an interrupted siesta.  Don’t let that disturb you; the album swiftly returns to the flow.  If you’re at the beach, you’re getting Vitamin C and Vitamin D, and if you’re not, Light Fronds is a beautiful daydream.

Charlie Salas-Humara’s guitar takes center stage on “Theophany,” whose meditative quality reflects its subject like the moon reflects the sun.  Guitar is Grapefruit’s primary instrument, but viola and piano find their way into the mix as well, hidden like seeds.  This is surrender to the sublime: a reminder of the Eternal Good.  The tone is particularly striking as Grapefruit (Salas-Humara) and Moon Glyph hail from Portland, Oregon, the epicenter of huge protests and federal brutality at exactly the time the tape was released. Portland is an artistic and forward-thinking community, typically characterized by love and respect, and this past month has been a declaration that Portlanders believe there is good in the world and are willing to stand up for it ~ to take beatings, to stop officers in their tracks by appearing naked (save for a mask), and to insist on everything that is true and right.

Moon Glyph’s music has always been a positive force, and tapes like this offer a quiet oasis of beauty where it is most needed.  In one sense, it has naught to do with politics; it’s just an instrumental tape about grapefruit!  In another, love, peace and happiness are intensely political, because our belief in these values, plus theophany, can keep us going even in the hardest of times.  (Richard Allen)